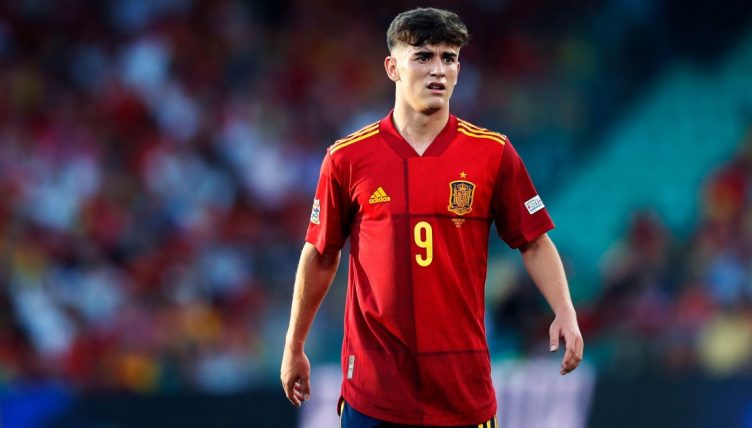 Barcelona’s 17-year-old midfielder Gavi is a ridiculous talent – one whom Liverpool are reportedly targetting – and he was showing off his skills in Spain’s UEFA Nations League game against Switzerland on Thursday night.

The Barca player is still two months shy of his 18th birthday but was winning his ninth cap against a battled-hardened Swiss XI at the Stade de Geneve.

Spain won a tight game 1-0 courtesy of a Pablo Sarabia goal set up by Marcos Llorente but the highlight of the game came later, when Gavi stole the souls of Xherdan Shaqiri and Granit Xhaka with some sordid footballing sorcery.

He picked up the ball just inside the Spanish penalty area, but was completely unfazed by the apparent danger and proceeded to flick the ball over Shaqiri’s head before rounding Xhaka with some sly footwork.

All the Arsenal man could do in response was shamelessly and cynically drag Gavi to the floor. Regulars at the Emirates may recognise this particular brand of ‘Xhakery’.

Spain boss Luis Enrique, who has picked Gavi for every game since his international debut, was full of praise for his young starlet after the victory in Geneva.

“Gavi? I don’t know what we can expect from him. That he continues to be as he is, a boy, a teenager rather… with a personality to play football that no one doubts,” he said.

“I don’t think anyone can say they don’t like Gavi. Only three players have played all three games, which is rare for me. I think Gavi could play 16 games in a row.”

Barcelona are well aware of what a gifted player they have in Gavi and are currently in the process of trying to nail him down to a five-year contract.

The deal would also include a whopping a €1 billion release clause, indicating the importance of the midfielder to the club’s rebuilding plans.

At the moment, Gavi’s release clause is just £43 million and it has been reported that he wants to quadruple his wage to €4million in the first year of his new terms.

Liverpool have been heavily linked with the former Real Betis youngster and are said to be monitoring developments closely.

Gavi, what a player 💎 pic.twitter.com/QXStB8b3D8