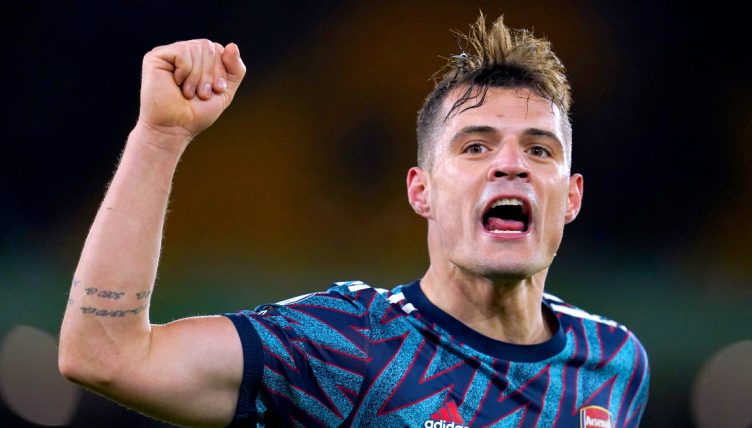 Arsenal were dominant in their 2-1 victory over Brentford on Saturday afternoon, as goals from Bukayo Saka and Emile Smith-Rowe kept the Gunners in a strong position in the race for a top-four spot – but people were quick to notice a bizarre set of events near the end of the game.

Granit Xhaka, who was infamously stripped of the captaincy in 2019, had a fine game in the middle of the park but, as captain Alexandre Lacazette departed the pitch for Eddie Nketiah, he was offered the armband again.

Much to everyone’s surprise, Xhaka turned down the armband from the substitute striker and a confused Nketiah then ran over to Kieran Tierney to hand it to him instead.

Xhaka has worn the armband since being stripped of the captaincy, but is still yet to regain the full trust of the fanbase after a series of errors that has seen the midfielder give away red cards and penalties regularly.

The 29-year-old is nevertheless a crucial player for Mikel Arteta’s side, but it is unclear as to why he turned the armband down.

Perhaps he felt it more appropriate to give to Tierney, who has been earmarked as a permanent skipper, or he didn’t want to wear it in front of the home fans again.

Xhaka defended his disciplinary record, which has seen him pick up five red cards in his time in North London, claiming that referees often treat him differently.

“I love to see tackles but they have to be fair. I don’t like to see someone injure a player on purpose – nobody does I think. But tackling is part of our job. My passion is to win and not let the opponent have the ball,” Xhaka told The Athletic.

“We are all human beings and make mistakes but it only comes from a place of passion. When I came to the Premier League everybody said in this league you can go very hard and I love it, this is exactly my game and what I want to do.”

“But when you see some tackles and imagine if I was in this position? I would be sent off straight away. This stops me sometimes to go in how I really want. If I really go how I want I will get a red card every three or four games.”