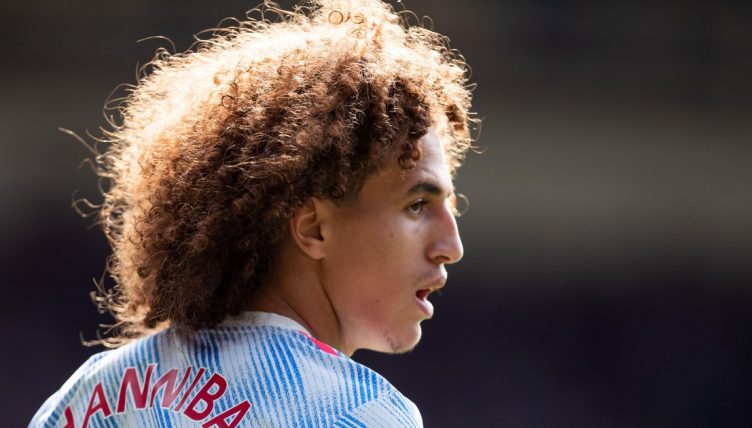 Wilfried Zaha and Hannibal Mejbri were caught up in an altercation after Manchester United’s midfielder became tangled with Palace’s talisman during their Premier League match.

Palace defeated United 1-0 in the last game of the season, and the last match of Ralf Rangnick’s disastrous and tumultuous reign in charge of the Old Trafford club.

Zaha was on the ball on the stroke of half-time when Mejbri went in for a challenge, twice challenging the Ivory Coast international. Palace’s No.11 eventually fell over and the duo became tangled on the floor.

Mejbri then lashed out at Zaha as he got up, which caused Zaha to fume at the 19-year-old. Referee Martin Atkinson, who was taking charge of his final game, gave United’s No.46 a yellow for his challenge.

Youngsters Shole Shoretire and Alejandro Garnacho both came on in the second half but couldn’t prevent United’s 1-0 loss to end the club’s worst ever Premier League season.

Ths isn’t the first time that Mejbri has gotten in trouble on the pitch, and he was once sent off in an Under-23s game for waving an imaginary card at the referee.

The Tunisia international also made a few fouls and received a booking during a brief cameo appearance n United’s 4-0 defeat to Liverpool earlier this season.

“To be fair at least the kid’s showing something,” former United captain Gary Neville said while commentating on the game fo Sky Sports.

“Honestly, it takes a young kid to come on and show the rest of them how to sprint to the ball and put a challenge in. I’m actually proud of him.

“Maybe he doesn’t like the idea of Liverpool passing around him, I wish the others were the same.”