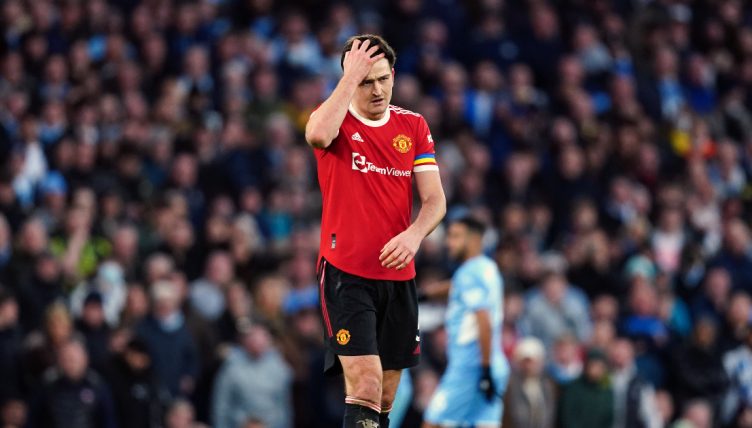 Harry Maguire is not having a lot of fun this season.

After a stellar campaign for England during Euro 2020, his performances and confidence have dropped dramatically and he has made a series of comical errors throughout the season which have attracted heavy criticism.

Manchester United’s struggles this season have seen them lose to their rivals in heavy defeats, and will likely miss out on a top-four spot after initially aiming to challenge for the league at the start of the campaign.

Being captain of such a big club means that when things aren’t going well, he ends up taking the blame, and his current performance levels has seen calls for Maguire to lose the armband.

In the Manchester derby at the Etihad, United were humiliated by their biggest rivals. Losing 4-1 in a performance where they were completely blown away, Maguire was heavily to blame for one of the goals.

A bizarre set of events took place in the buildup to Kevin De Bruyne’s second strike, which saw Maguire and Aaron Wan-Bissaka both flail about in the box like fish out of water.

David De Gea parried Phil Foden’s fierce shot away, and the ball somehow made it through the legs of Maguire, before the defender then stretched to try and block the follow-up effort from Bernardo Silva.

It is defending like this which causes Maguire to receive so much criticism. The lack of focus and awareness to get nutmegged by your own goalkeeper sums up how bad United were in the derby.

There were recent rumours circulating that United players wanted their captain to be dropped, and ex-Arsenal midfielder Paul Merson stated before the game that he shouldn’t be in the lineup for the derby.

“If the reports are accurate [of players wanting Maguire dropped], that’s not nice because Maguire is a top bloke and a good professional who looks after the players,” Merson stated on Soccer Saturday.

“He’s not really worried about himself and he’s a team player.”

Rafael van de Vaart recently tore into Maguire on Dutch television with a simple statement: “he is very sh*t.”

After watching this, many will be inclined to agree.