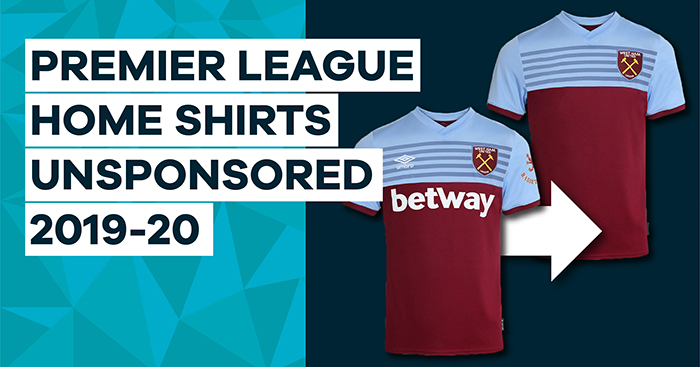 We all fell in love with Manchester City’s shirt for the Community Shield – but just imagine how good it would be if there was no sponsorship on any kits.

City wore a retro kit to mark their 125-year anniversary for the game against Liverpool, but come the start of the Premier League season the familiar Etihad Airways sponsor was once again front and centre on their shirts.

Huddersfield Town in the Championship, however, are playing in sponsorless kits this season after Paddy Power effectively paid not to have their logo on the front of the Terriers’ shirts, albeit after a prank which saw the Yorkshire club play a friendly in a kit featuring an enormous sash sponsor aimed to ‘shine a light on the issues around shirt sponsorships’.

It’s unlikely other brands will be agreeing to give up their place on the front of Premier League shirts anytime soon, but we can dream at least. So here’s how all 20 home kits for the 2019-20 season would look without a sponsor or manufacturer logo.

Do students know the first ever Premier League shirt sponsors? | Who Are Ya?

Do students know famous 90s football TV shows? | Who Are Ya?