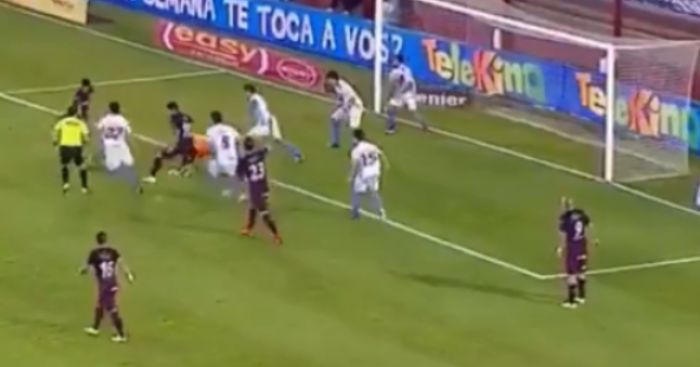 South American football doesn’t do things by half measures, particularly in Argentina, as Lanus’ controversial clash with Arsenal proved in 2014.

Lanus were challenging for the title when they hosted Arsenal with six matches of the league campaign remaining.

A seventh-minute opener from Silvio Romero put Lanus on track, only for goals from Brahian Aleman and Ramiro Carrera to put the visitors ahead.

They continued to frustrate the hosts and carried their lead into stoppage-time, with five minutes added on.

With just over 95 minutes on the clock, Lanus bagged a dramatic equaliser through Diego Gonzalez, prompting fury on the touchline as Arsenal boss Martin Palermo and his assistant, former Argentina team-mate Roberto Abbondanzieri, were sent off.

Despite everyone seeming to think the game was finished, referee Andre Merlos added on even more time. Arsenal almost snatched a winner, but play was allowed to continue until Lanus scored one of the most hilariously sh*t goals through Lautaro Acosta, helped by a handball in the build up.

Chaos ensued, with Merlos chased around the pitch by Arsenal players and staff before eventually being escorted from the stadium by police. He was indefinitely suspended and did not officiate a match for 148 days.

We shouldn’t laugh at any of that, but we can almost certainly laugh at the winner.

Only PES can faithfully reproduce the beautiful game from r/WEPES

Watch the full passage of play, from the equaliser to the post-match brawl, here: