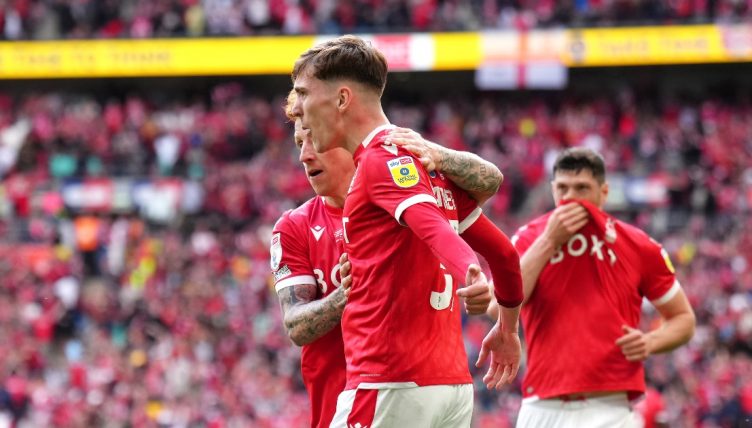 Nottingham Forest are back in the Premier League for the first time since 1999 – and it was a strike from Manchester United loanee James Garner that sealed their play-off final victory.

It’s been a long 23-year wait for Nottingham Forest, but that’s finally over thanks to a 1-0 victory over Huddersfield at Wembley.

The famous old club turned their form right around after a disastrous start to the 2021-22 campaign under experienced coach Chris Hughton – and they were arguably the Championship’s best side since Steve Cooper was appointed in mid-September.

Once again, it’s been Manchester United academy graduate Garner that’s been one of their standout players. The 21-year-old midfielder will be hoping to make the grade in Erik ten Hag’s squad in the near future, and he’s certainly done his case no harm after another eye-catching loan spell.

Whatever happens next, whether it’s back at his parent club or another loan to the City Ground, Garner will be surely be turning out in the Premier League next season – and he looks well up to it.

“He has been excellent,” Cooper told The Athletic in March. “Over recent months he has been a high-performing player in the team. He has been a constant selection for us. The loan is proving to be a really beneficial one.”

So it was no surprise that it was ultimately a contribution from the Manchester United man that made the difference at Wembley.

The only goal of the game was an own goal from Huddersfield defender Levi Colwill, on loan from Chelsea. But it happened after a wicked cross from Garner asked questions of the Terriers’ backline.

Forest are ahead at Wembley! It's a nightmare moment for Huddersfield's Levi Colwill! 🙈#EFLPlayOffs 🏆 pic.twitter.com/Wy22itx2b9