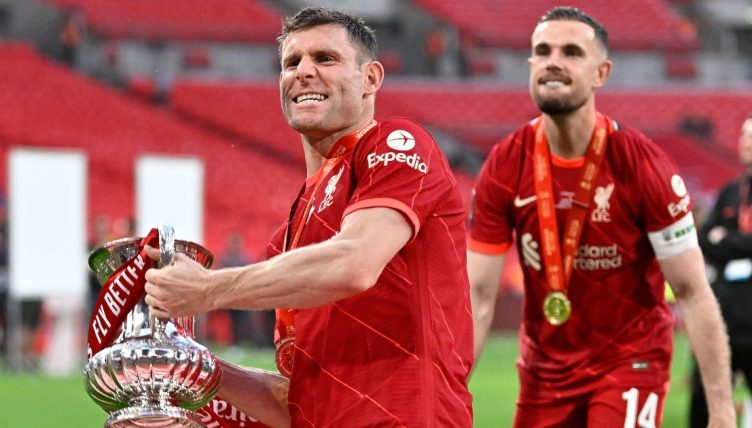 Milner, who played in two FA Cup finals with Manchester City, started on the bench but replaced Naby Keita in the 74th minute at Wembley.

Despite both sides creating some great chances in regulation and extra time, a breakthrough couldn’t be found and the game went to penalties.

Milner took Liverpool’s first penalty in the shootout and Edouard Mendy got a hand on the ball but couldn’t keep it out of the back of the net.

After Cesar Azpilicueta, Sadio Mane and Mason Mount all missed from the spot, Tsimikas stepped up to win the FA Cup for Liverpool.

But Milner had his back to the wall as Tsimikas took his penalty and then jumped up in the air after realising Liverpool had won.

The 36-year-old has now 12 trophies at club level in his career and passed on some advice to his team-mates.

“You never know when it’s going to be your last,” he said after the game. “You go into the dressing room after the game and all of the lads are straight on their phones. I’m saying: ‘You’ve won the FA Cup – get off your phone!’

“Yeah, you get 40 or 50 messages but you get on the bus and you can deal with that. You are lucky to be a footballer, lucky to play in any final and to win ten medals, if you’ve said that to me at the start of my career then I’d have been pretty happy!

“I said to Trent [Alexander-Arnold]: ‘don’t get bored of it!’ What an incredible player he is but he’s got to be. He deserves everything but you never know when things are going to change and you have to enjoy it.”