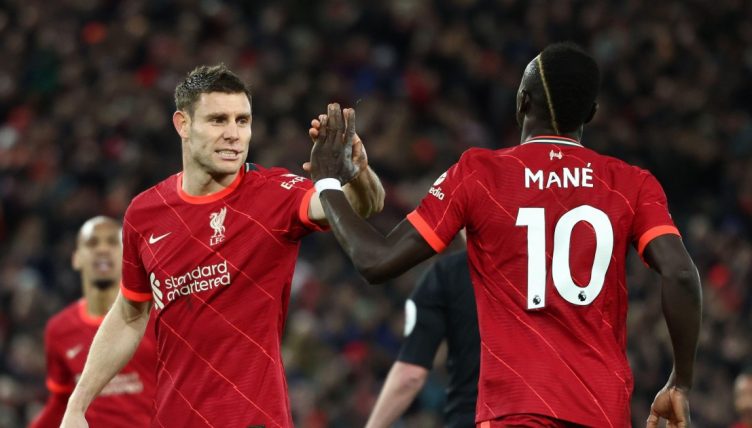 Liverpool strolled to a 4-0 victory and were barely threatened by a limp United. The result took Liverpool to the top of the Premier League table as they continue their pursuit of all the major trophies on offer to them.

Mane produced an outrageous pass for Liverpool’s second, sending the ball effectively behind him and into the path of Salah who was running through into the Manchester United box.

The ball went almost 180 degrees from Mane’s starting position, and such was the incredible nature of the pass Milner could only put his hands to his mouth in shock and look around, unable to believe what he had just witnessed.

Salah’s goal added to Luis Diaz’s opener, a simple tap-in at the back post after some poor defending. Mane then score himself in the 68th minute to put Liverpool three up before Salah scored his second and Liverpool’s fourth.

Liverpool have now beaten United twice this season, first 5-0 at Old Trafford and then 4-0 at Anfield for a total of nine goals without reply.

“I am not here to humiliate opponents. We did what we had to do in the games,” Liverpool manager Jurgen Klopp said after the match.

“They played without their centre midfielders and when you are in a difficult situation like United before the game, Paul [Pogba] has to go off and it is not easy to play against us.

“9-0, I am not interested in that is something for the supporters if they want to celebrate.

“I know it will not last forever, they will strike back.”

Liverpool now face Everton in a Merseyside derby as they continue to challenge Manchester City for the Premier League title.