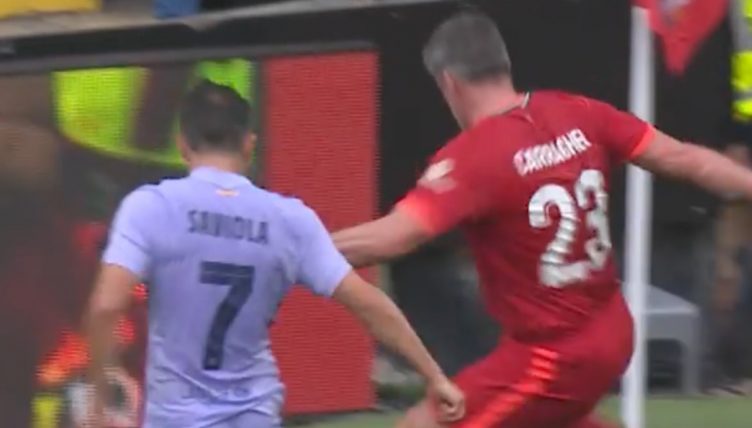 Liverpool legend Jamie Carragher produced a Cruyff turn to the delight of the Kop in a one-off fixture between Liverpool and Barcelona Legends.

Carragher was one of a host of ex-players – including Steven Gerrard – to pull on the Reds’ shirt once again in front of a sell-out Anfield crowd on Saturday afternoon.

Gerrard’s goal from the penalty spot handed a Liverpool side managed by Sir Kenny Dalglish a first-half lead before Barca’s captain Rivaldo inspired a comeback win for a star-studded Catalans outfit.

With a plethora of retired iconic attacking talent lacing up the boots, it probably wasn’t a man famed for his no-nonsense approach in his playing days that many could have predicted would produce the best piece skill of the match.

Retrieving the ball from former Argentina international Javier Saviola, Carragher left the forward in his wake with a party piece made famous by the late-great Barca legend Johan Cruyff in the 1974 World Cup finals with the Netherlands.

As well as the surprising skill, the 44-year-old’s competitive nature was also on full show as he crunched into tackles and marshalled his defence through the match. There’s no such thing as a friendly in the Liverpudlian’s eyes.

“One of the best talkers that springs to mind [during my career] was Jamie Carragher,” ex-England team-mate Darren Bent said earlier this year.

“He was constantly screaming: ‘Get up, squeeze, drop off, right shoulder, left shoulder.’

“It’s an underrated skill and you listen to Virgil [Van Dijk], he’s quite vocal but Carragher – all the time!”

After racking up a remarkable 737 appearances during his time at the Reds, Carragher retired at the end of the 2012-13 season. But even nearly a decade on, his display against Barca showed he’s still as eager as ever to win in a Liverpool shirt.

And now, he’s got the odd trick in his locker as well. Who would have known!

Divock Origi next? 7 Liverpool heroes that left Anfield for nothing