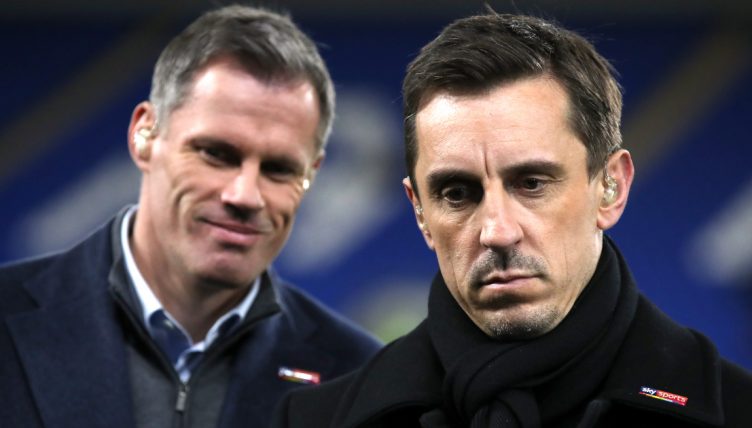 Former Liverpool defender Jamie Carragher couldn’t help but laugh at Gary Neville after the duo looked back at their pre-season predictions on Sky’s Monday Night Football.

While both pundits felt that Manchester City and Chelsea would be the top two, Neville predicted that United would finish above Liverpool.

“I just think they’ve got a better squad,” Neville said in August. “I think Liverpool have got a better first XI but you know Liverpool, with a couple of injuries, do have that drop in level.

“United don’t really have that drop in level in any position.”

That prediction didn’t raise too many eyebrows at the time as United finished second in the Premier League 2020-21 before signing Jadon Sancho and Raphael Varane.

Despite adding Cristiano Ronaldo to their squad at the end of August, United have endured a disastrous and underwhelming season.

Ole Gunnar Solskjaer was sacked in November and interim manager Ralf Rangnick has not made the desired impact at Old Trafford. They are currently sixth in the table and will finish the season with their worst-ever points total in the Premier League era.

The Red Devils are also 28 points behind Liverpool, who have been back to their best in 2021-22 and could end the season with four trophies.

Jurgen Klopp’s side have already won the FA Cup and League Cup and will face Real Madrid in the Champions League final. They are currently trailing Manchester City in the Premier League but the title race looks set to go down to the final day.

When reflecting on Neville’s predictions after Arsenal’s 2-0 defeat to Newcastle, Carragher couldn’t help but laugh at the fact that his colleague thought United would finish third.

Neville prediction’s really haven’t aged well as he also thought that Everton would overachieve and Romelu Lukaku would be the Premier League’s top scorer.

"I can't believe how badly it's gone for him" @Carra23 and @GNev2 look at how their start of the season predictions did 👀👇 #MNF pic.twitter.com/5Wk49oc7Sr