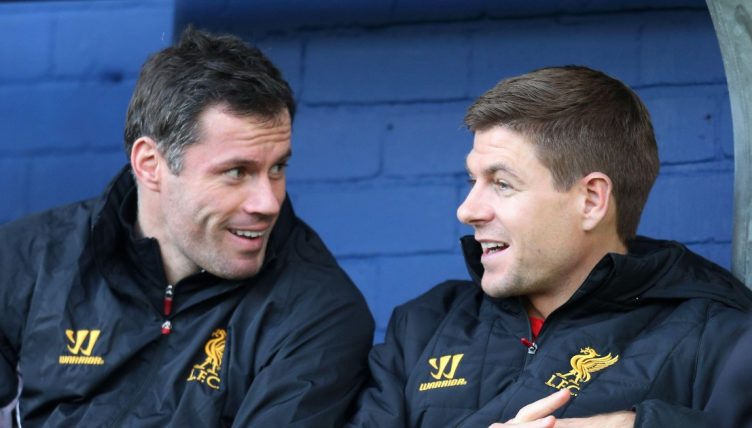 If City lose or draw against Villa and Liverpool pick up all three points at home against Wolves then the title will go to Jurgen Klopp’s men. Otherwise, Pep Guardiola’s City will lift a second successive Premier League.

“I was on the phone to him until 2 o’clock in the morning last night,” Carragher joked whilst on punditry duty with Sky Sports.

“We’re very close so we chat most weeks, whether a game of this importance comes up or not.

“I just text him actually and said “are you going to go full Jose [Mourinho]? He just started laughing so didn’t give too much away.”

There’s been much talk ahead of the match around Gerrard’s connection to Liverpool, and whether that would spur him and his side on to fight harder and hand the title to Liverpool.

“I think Jurgen Klopp said it right in the press conference, he doesn’t need anyone to get in touch with him,” Carragher said.

“His dad and brothers are massive Liverpool fans, his whole family. He’ll be well aware of that.

“But he’s Aston Villa manager. They’ve had a couple of home games they would have maybe liked to have get more points on the board and you want to finish the season strongly.”

Carragher also said he felt like the possibility of being part of history could have Wolves and Villa players playing at a higher level.

“I always feel that whether it’s Wolves or Aston villa, they’re never going to be involved with a game where they’ll be winning a title at those particular clubs, no disrespect,” the Liverpool legend explained.

“But they could be involved with something really special: stopping a team from winning a title.”

🗣️ "I just text him saying 'are you going to go full Jose'?"