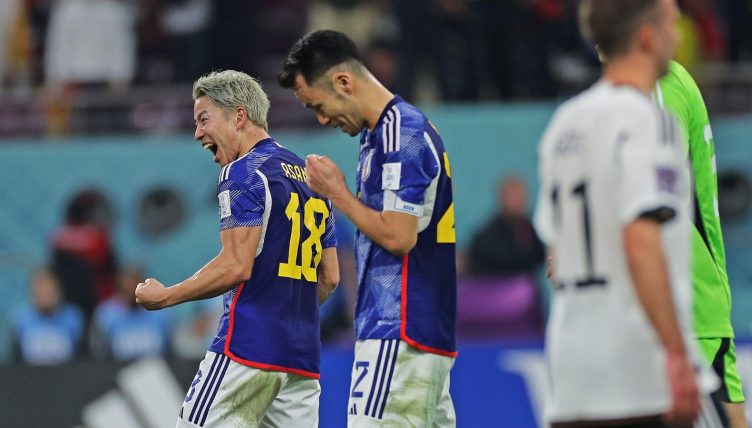 Japan pulled off the second big upset of the 2022 World Cup with their 2-1 win over Germany and Japanese television understandably couldn’t quite contain their excitement over their side’s exploits.

Many observers expected Germany to get their Group E campaign off to a winning start, especially after Ilkay Gundogan’s penalty in the first half gave the four-time World Champions the lead.

But Japan roared back into the match over the second 45 minutes after manager Hajime Moriyasu made a decisive triple substitution.

Ritsu Doan equalised with 15 minutes left after the legendary Manuel Neuer could only turn a cross back into danger and, eight minutes later, Takuma Asano stunned the Khalifa International Stadium with a moment that instantly entered World Cup folklore.

Niklas Sule played the VfL Bochum forward onside from a free-kick as Asano darted into the Germany box while fending off Nico Schlotterbeck, before beating Neuer at his near post.

It was a moment that caused jaws to drop across the planet and the goal sounds even better when soundtracked by Japanese commentary.

“I’m noticing that Germany is getting a little anxious,” one commentator – excuse our Japanese – said. “The substitutions have changed the course of the game.”

“GOAL! WE’VE SCORED! JAPAN HAS MADE THE COMEBACK!”, they declare. “Germany has opened up and allowed Japan to stage this comeback. The stadium has erupted into life!”

After composing themselves, one says: “All that’s left is to protect the lead. Japan just needs to defend it now.”

In perhaps the best line, the other commentator replies: “We all wondered whether there would be an upset. That time has come!”