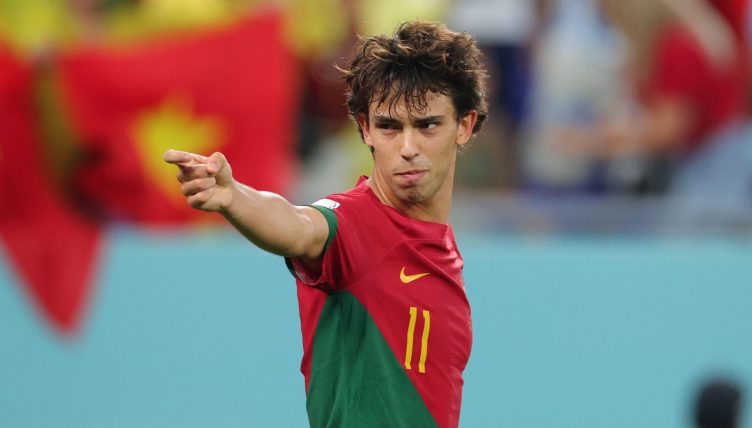 Fabrizio Romano has broken down the latest on Joao Felix’s transfer situation, mentioning the likes of Manchester United, Chelsea and Paris Saint-Germain as a potential destination.

The Atletico Madrid attacker has fallen out of favour under Diego Simeone and it looks increasingly unlikely that both figures will remain at the La Liga club by this time next year. Indeed, Felix is even being talked up as a potential January transfer.

Felix is currently lining up alongside the likes of Cristiano Ronaldo and Bruno Fernandes at the World Cup, giving us a reminder of what he can offer by scoring in Portugal’s opening 3-2 win over Ghana.

The 23-year-old forward moved to the Spanish capital for a €126million fee in the summer of 2019. He’s the fourth most expensive player of all-time, and remains Atletico’s record signing, having reinvested the bumper fee they received from Barcelona for Antoine Griezmann that same summer.

Neymar, Kylian Mbappe and Philippe Coutinho are the only three players in the history of football to have moved for bigger transfer fees, so you can be sure that the Spanish giants will be looking to recoup most, if not all, of that investment.

Simeone has struggled to get consistent performances out of the rising star, but he’s shown more than a few flashes of his potential, having played a key role in their 2020-21 La Liga title victory while registering 33 goals and 19 assists in 129 appearances for the club. He remains contracted until 2026.

“The team is really good and the reality is another thing, the field of play. And in the reality of the field of play the thing is there’s a manager who picks the best players as a result of what he sees,” Simeone said back in October, defending his decision to keep benching the club’s prize asset.

“Do you think I’m not playing Joao to lose? No manager does that.

“When he starts to play well again in training, he works, he recovers his goalscoring touch, which we need, he will play. But while I’m here, it’s about performance, that’s why his other teammates are playing. It’s clear that each time he was good, he played.”

Italian transfer guru Fabrizio Romano has posted a new video update in which he’s broken down the possibility of Felix departing Atletico in the coming weeks.

“We know how special this talent is, but we also know that his situation with Atletico Madrid is not that easy,” Romano began.

“Not with Atletico Madrid as a club. Because the feeling between Atletico and Felix has been great, with the fans, with the board. But with Diego Simeone, he’s not been in the regular starting XI, it was not an easy first part of the season for Joao Felix.

Romano then went on to spell out the difficult situation, before moving on to a potential destination.

“The next club has to bring a really important proposal, we will see if it happens in January,” he added.

“Let’s see what happens, especially with English clubs. Manchester United were asking in the summer but they didn’t make a bid because for Atletico, he was untouchable. We also know that Chelsea have sent their scouts multiple times to follow Joao Felix. And also, Paris Saint-Germain could be one of the options for Joao Felix in January 2023.”

READ NEXT: A remarkable XI of players sold by Benfica since 2010: Dias, Silva, Felix…