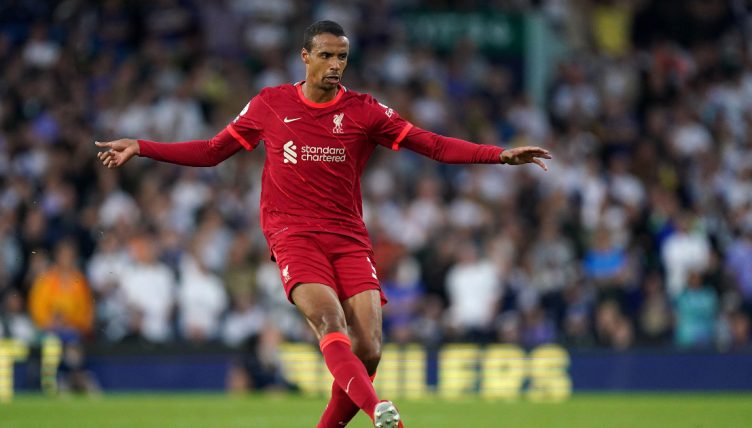 Manchester City and Liverpool served up an entertaining 2-2 draw at the Etihad in one of the biggest games of the season.

But there could have been even more goals, with Riyad Mahrez missing a good opportunity in the dying seconds of the game.

What was originally seen as a poor miss from the Algeria international is now being viewed as a fantastic block from Liverpool centre back Joel Matip, as a slow-motion replay shows that the ball deflected over the bar from his shinpad.

City’s opening goal, scored by Kevin De Bruyne, took an unlucky deflection off Matip so the defender will have been relieved that his deflection ended positively when it came to dealing with Mahrez.

The 30-year-old has been in excellent form for Liverpool this season and yet again showed why he is so crucial for Jurgen Klopp’s side.

Matip won the Premier League player of the month award for February and is finally receiving the credit he deserves after years of excellent performances next to Virgil van Dijk.

“He obviously (doesn’t) get a lot of headlines. I am not too much into individual prizes for football players, but if someone should win it, then I think it makes real sense it is Joel. It is really cool,” Jurgen Klopp stated after he was given the award.

“Believe me though, if there is one person on this planet who couldn’t care less if we all underrate him, it is Joel Matip.

“Honestly, he doesn’t realise it. He is just happy to be with these boys and playing football.

“He is a really smart person, but not in these kind of things where he thinks ‘oh I should have another status,’ not at all, that is why everyone was so happy that he got it.”

This one block could be a deciding factor for the destination of the Premier League title, as Liverpool remain just one point behind Manchester City after the draw.

Mahrez chip was net bound until Matipped it over bar what a tackle 👏#MCILIV pic.twitter.com/6iYN1q3f5h