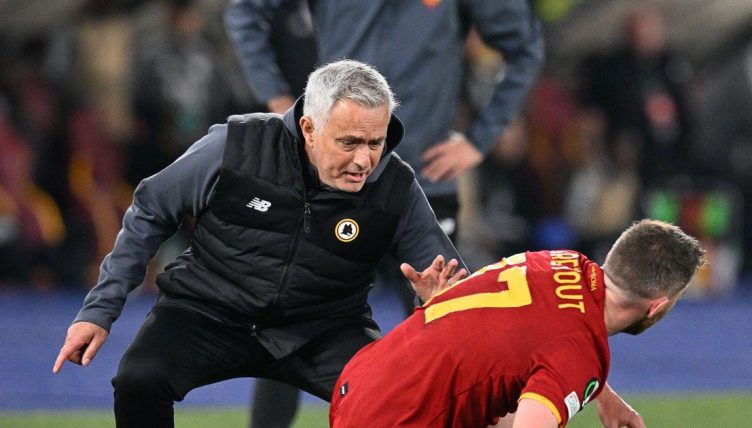 Jose Mourinho was in tears after his Roma side advanced to the first-ever Europa Conference League final thanks to a 1-0 victory over Leicester City.

Mourinho simply couldn’t hold his emotions in at the final whistle, and began crying while his coaching staff and players surrounded him.

“I am very emotional. This for us is our Champions League,” he said after the match.

“When you work in Rome, live in Rome, and breathe Rome, you breathe this club because it is the real club of the city.

“I felt from day one it is huge, but no victories and not many finals. The history is not related to the social dimension of the club.

“We managed to build an OK team that grew step by step so we could beat a Premier League team.

“Of course, I have had bigger moments than this but I am not feeling for myself, I am feeling for the people and my players.”

Abraham has been the central focus of Mourinho’s side this season, but the Portuguese manager has only praised the striker a limited amount in public.

“Tammy knows, I refuse to speak highly of him. Because he can do better and he knows that! He is a great player with the potential to be even greater,” Mourinho explained.

“I refuse to praise him! He needs to work this hard in every game, not just when we are up against Lazio or fighting for a European final.”

José Mourinho in tears after reaching the Conference final. Might not be the biggest final in his career, but man does this show how much he loves the game. Imagine not loving this man. pic.twitter.com/ZNXoAGqzOq