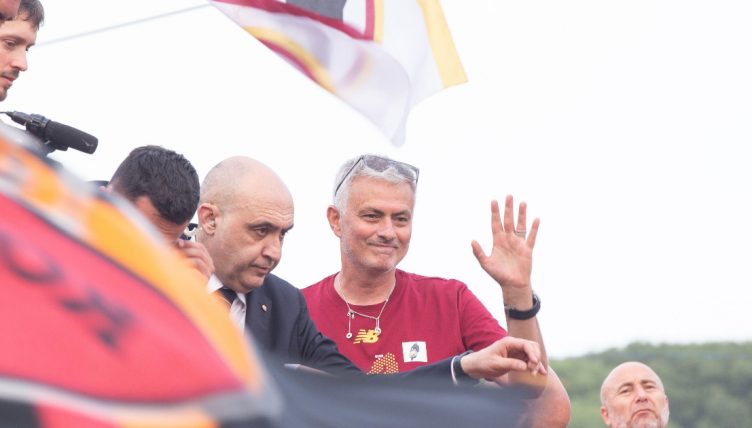 Roma won their first European trophy as they beat Feyenoord in the inaugural European Conference League final, and their victory parade, which attracted thousands of fans, was a special moment for manager Jose Mourinho as he was finally caught ‘parking the bus.’

Mourinho is one of the most decorated managers of all time and brought success to Roma in his first season at the club, but for years his critics have accused him of playing such defensive football that he ‘parks the bus’ in front of his team’s goal.

Now, the Portuguese coach has been caught parking an actual bus. As Roma fans descended on the Italian capital to celebrate their victory, the 59-year-old drove the team coach and enjoyed himself as he attempted to park it.

His Roma players cheered on as he struggled to control the bus whilst chanting along with the players before the parade began, and it was clearly the most fun Mourinho had in a while after a difficult few years.

After being sacked at Manchester United, Mourinho took the job at Tottenham and was sacked just days before their Carabao Cup final against Manchester City.

The coach was asked recently whether he felt vindicated that United continue to struggle years after his departure while he has won more silverware than both his last two clubs this season.

“Of course, my English connection is Chelsea – that’s the way I’m seeing it, as a Chelsea man, two periods at Chelsea, six years.

“The first thing you have to change, for me, when things are not going right is mentality and organisation and it was not coming.

“And I knew that for me to leave was not going to resolve the situation. I knew that, unfortunately. I wish them the best, honestly, and hopefully they make it.”

Jose Mourinho got to drive the Roma parade bus before the parade started 😭😭😭 pic.twitter.com/jEQS67N2Ck