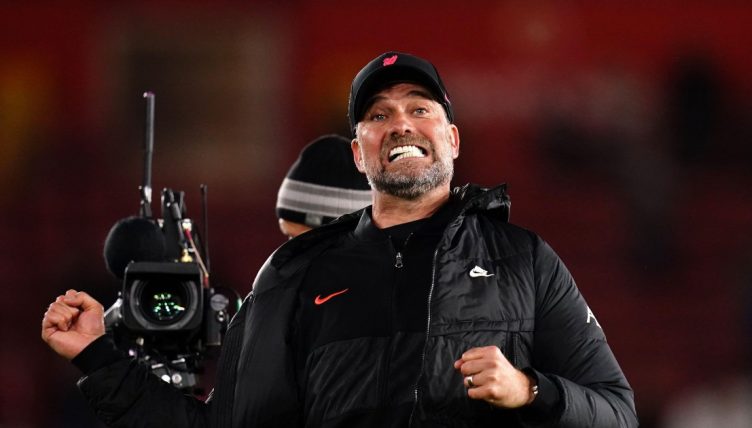 Jurgen Klopp produced a powerful and passionate celebration after Liverpool’s vital 2-1 comeback victory over Southampton in the Premier League.

A goal from Takumi Minamino and one from Joel Matip was enough for Liverpool to take a hard earned three points with them back to Anfield.

They will now face Wolves in Merseyside on Sunday, knowing a victory could give them a Premier League title and an unprecedented shot at a quadruple if Manchester City slip up against Aston Villa.

Klopp knew the scale of the victory and celebrated passionately with the travelling Liverpool fans, fist pumping towards them three times with each being returned by the away support with a shout.

The German then beat his chest, before walking back to the dressing room.

Klopp named a heavily rotated side for the game, complaining about fixture scheduling after the FA Cup Final went all the way to penalties on Sunday, but would have been pleased to see his firing players come through the Saints.

“I had different things to consider, with the results Southampton have had against other top-six teams we need 100% desire, we need to be ready for a proper fight,” he explained pre-match regarding his team selection.

“In the moment when I did the line-up I got really excited about it. Now we are here with a very positive feeling, we want to go for it. We know it’s difficult but we have a team who will try absolutely everything to cause Southampton problems.”

The title was momentarily on its way to Manchester City when Nathan Redmond’s deflected strike beat Alisson, but Liverpool showed character to come back and win all three points.

“We are different teams with similar skills,” Klopp said.

“I’m not sure intense is even the right word anymore. The levels we push each other to is absolutely crazy.”

Jurgen Klopp fist pumps towards the travelling Liverpool fans as they keep the pressure on the leaders 👊 pic.twitter.com/mHTDP5Tqbr

Six of Alisson’s most iconic and decisive moments at Liverpool