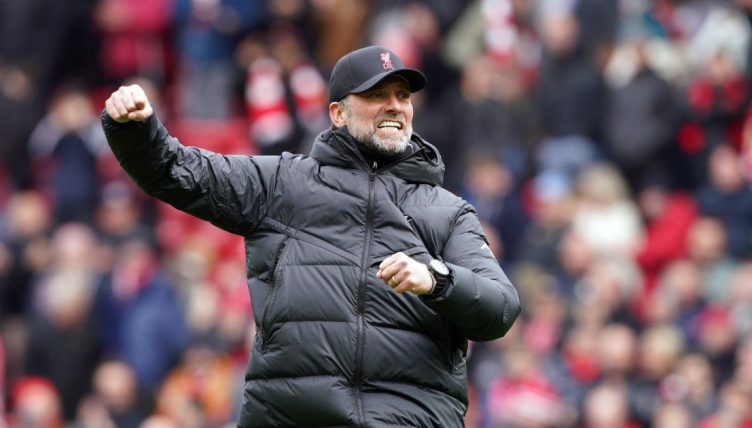 Liverpool earned victory through a first-half header from Diogo Jota and a late Fabinho penalty to temporarily take over at the top of the table.

It was a hard-fought victory, and Watford had several chances to score on the counter-attack throughout the match but couldn’t find a way past goalkeeper Alisson.

Whilst Liverpool did not have their most emphatic performance, they nevertheless created enough chances to deserve victory.

It caused Klopp to head over the Kop, swirling his hand around before pumping it several times in the air which on each occasion was met with a cheer from the famous stand.

On his way off the pitch, he continued to clap towards the fans, only stopping to hug Alisson.

“Everyone wants to analyse the game, but I’m not interested in that today because we had to get through this,” Klopp said after the match to BT Sport.

“We could have done definitely better but it’s not too interesting today. We needed maturity, we needed desire… with the ball, we could have been slightly more creative, offering more runs in behind.

“But we scored the two goals and controlled the game in other parts.”

The win took Liverpool finally back to the top of the Premier League, but City will retake their place at the head of the table via victory away at Burnley.

It sets things up for an exciting title clash next Sunday when Liverpool travel to City at the Etihad, the winner of which will be in pole position to win the title.

International breaks and 12.30pm kickoffs don’t go hand-in-hand for us.

But a good victory and top of the league 👏🏼👏🏼

Bobby man of the match for me

Fist pumps at the end by Klopp pic.twitter.com/qA1bMVtW7S