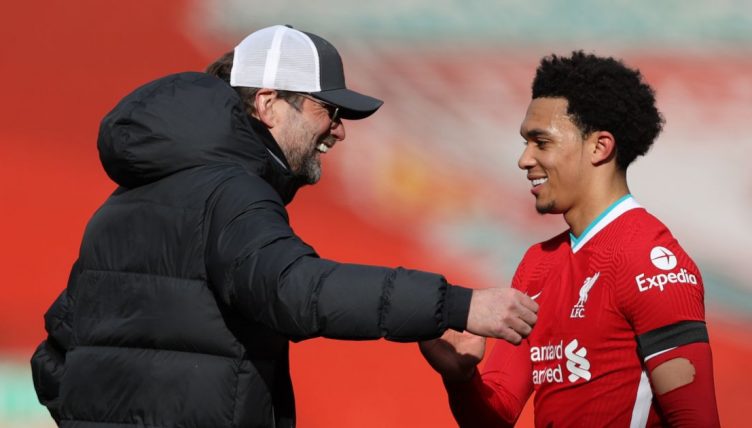 Alexander-Arnold was given a difficult evening’s work, coming up against Arsenal’s dangerous Brazilian winger Gabriel Martinelli. But Alexander-Arnold stuck at his task and helped the Reds keep a clean sheet.

Their defensive record has been excellent, too. They’ve kept seven clean sheets and conceded just two goals over that run, with Alexander-Arnold playing a prominent role throughout.

Virgil van Dijk and Alisson are the only Liverpool players have clocked up more Premier League minutes this season than Alexander-Arnold, and no player in the entire division has registered more assists.

Martinelli presented a new challenge for the 23-year-old, coming at him with trademark directness, skill and pace. But the Liverpool boss was pleased with how his defender handled the situation.

“Martinelli is such a talented boy. It’s really tricky, if anybody says Trent can’t defend, they should come to me I’ll knock them down,” Klopp told Sky Sports in his post-match interview. “Honestly, I cannot hear that anymore. I don’t know what the boy has to do.”

Klopp’s sentiment was shared by Liverpool left-back Andrew Robertson, who singled out Arsenal’s wide attackers for praise before crediting Alexander-Arnold with how he dealt with Martinelli.

“Gabriel Martinelli and Bukayo Saka are really hard work. I think Trent Alexander-Arnold was outstanding. It was a really tough game. It was great to have a clean sheet,” Robertson told Sky Sports.

It’s expected that Alexander-Arnold will be included in Gareth Southgate’s England squad for the upcoming international break, with friendlies against Switzerland and Ivory Coast, before attention turns back to club matters and the title run-in with Manchester City.

🗣 "Martinelli is such a talented boy. It's really tricky, if anybody says Trent can't defend, they should come to me I'll knock them down."