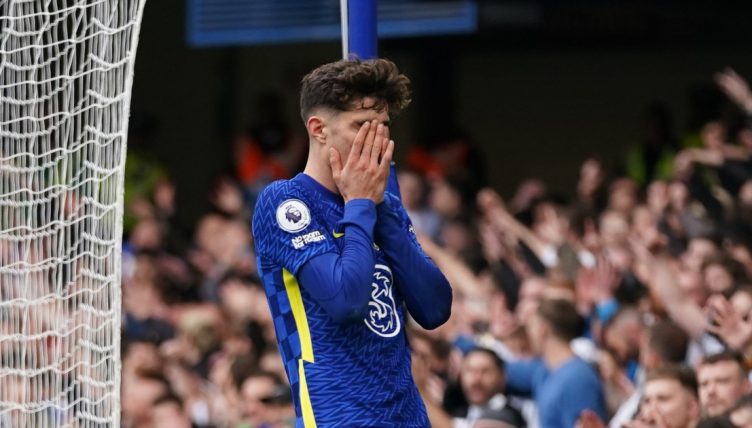 Kai Havertz was booked in Chelsea’s FA Cup semi-final with Crystal Palace at Wembley for diving in an attempt to win a penalty in the first half.

The Germany international has performed well under his compatriot Thomas Tuchel this season, but his attempt to con referee Anthony Taylor didn’t work.

Havertz picked up the ball right on the edge of the Palace box and drove forward. England international Marc Guehi dangled his leg, and the 22-year-old fell to the ground untouched without hesitation. He was subsequently shown a yellow card for his dive.

“The Crystal Palace players are going crazy, because that, for me, is such bad simulation. It’s not what you want to see in the game, especially at the highest level in a big moment.

“It’s actually stupid from him because his first touch takes him past the defender anyway – he’s in, he can get a shot off, he’s one-on-one with the keeper almost.

“I hate to see it in the game. We need to get it out as quick as possible – I would have sent him off!”

Tuchel’s side took the lead in the 65th minute when Ruben Loftus-Cheek, who enjoyed a loan spell at Palace in the 2017-18 season, smashed a volley into the back of the net.

Mason Mount made it 2-0 moments later, cooly slipping a low finish beyond Jack Butland after being picked out by Timo Werner.

Chelsea’s victory over Palace means they’ll face Liverpool in next month’s FA Cup final. It’ll be a repeat of this season’s League Cup final, where Liverpool won on penalties after a 0-0 draw.