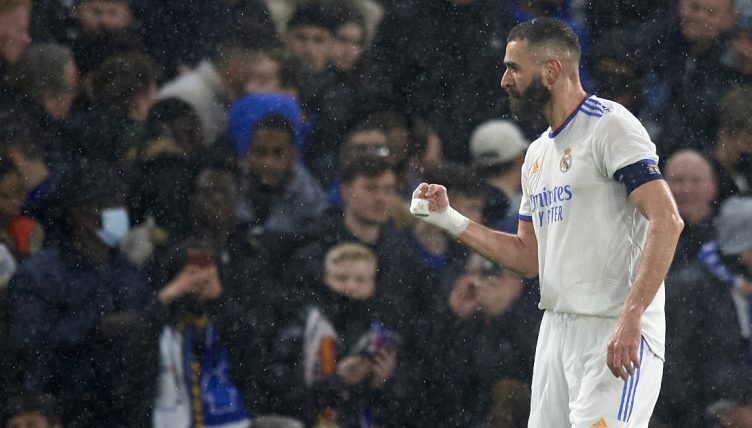 Karim Benzema was the man for the big occasion yet again as his stunning hat-trick at Stamford Bridge gave Real Madrid a 3-1 lead over Chelsea in the Champions League quarter-final first leg – and his overall performance was spectacular throughout.

Early on in the first half, the 34-year-old striker picked up the ball in the Chelsea half, and drove forward, before laying the ball off to Federico Valverde with a magnificent back-heel.

The flick completely evaded Cesar Azpilicueta and Thiago Silva, leaving them in awe at such sublime skill, and should have set up an early opener. Valverde set up Vinicius Junior, who saw his shot cannon back off the crossbar.

Benzema would then go on to score two magnificent headers in the first 25 minutes, before adding his third at the start of the second half after a mistake from Edouard Mendy in goal for Chelsea.

The France striker now has 37 goals in 36 games in all competitions this season, his best ever tally, and this hat-trick has added to his Champions League total, following his treble against PSG in the previous round.

Widely regarded as one of the greatest strikers of all time, Benzema has won everything on offer in his 13 years at Real Madrid, and is the fourth-highest goalscorer in Champions League history, with 82 goals.

Real Madrid manager Carlo Ancelotti was full of praise for the veteran forward after his display put his side one step closer to Paris.

“Karim Benzema is getting better every day; just like a fine wine,” Ancelotti stated after the game.

“He’s more of a leader every day, he feels more and more important in this team and this squad. And I think that’s what makes the difference.”

“He has so much more personality, he knows he’s a very important player for us and he’s an example for everyone.”

With perfectly placed headers and outrageous backheels like this in his locker, Benzema is arguably the most complete forward in the world right now.