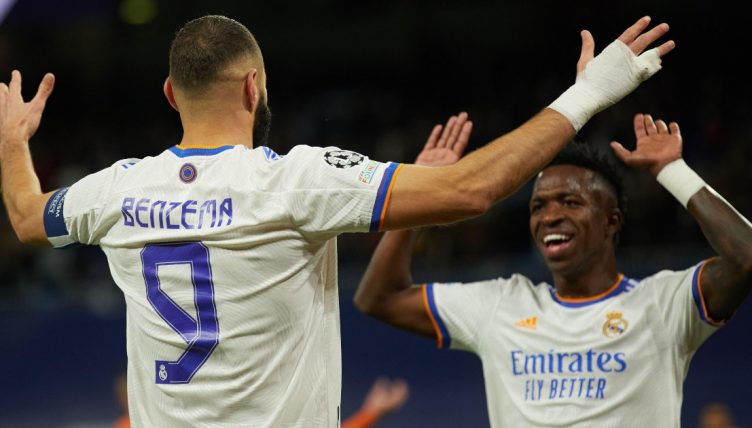 Karim Benzema showed just how important he is to Real Madrid on Tuesday night by guiding Vinicius Junior through his vital goal in their Champions League quarter-final against Chelsea before he scored.

Benzema scored the tie’s winning goal, heading home for Real Madrid in the sixth minute of extra time to win the classic encounter.

Before extra time started, however, Benzema took Vinicius Junior to one side and talked to him about how to score against Chelsea’s resolute defence.

He used his hand as a tactics board and guided his young Brazilian partner through where he would be in space in the Chelsea box.

Moments later Benzema scored, assisted by the 21-year-old winger. Vinicius roamed into the Chelsea box from the left wing, before delivering a beautifully lofted ball over the Chelsea defence to Benzema, who ran onto the ball from outside of the box.

The Frenchman headed it back the way it came, wrong-footing Chelsea ‘keeper Edouard Mendy, who could only watch as the ball ended up in the back of the net.

It was an incredible moment in an incredible match. Chelsea had gone 3-0 up, but a late strike from Madrid winger Rodrygo sent the match to extra-time with the scores tied on aggregate.

“We struggled after going 2-0 down, I think the team went down a bit psychologically,” Madrid manager Carlo Ancelotti explained after the match.

“I am very, very happy to have reached the semi-finals with this team, with this club, suffering a lot. But the more we suffer, the more I am happy.

“I think that tonight we showed that we can compete up until the very last match.”

Madrid, who are on course to win La Liga, will now face Manchester City in the semi-final.