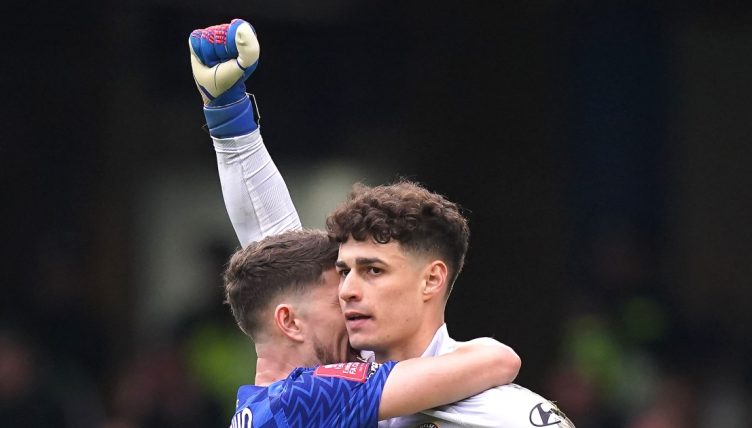 Chelsea edged past Plymouth Argyle in their FA Cup tie at Stamford Bridge on Saturday afternoon – but they were indebted to a late, late penalty save from stand-in goalkeeper Kepa Arrizabalaga.

The European champions were expected to cruise past their League One opponents during this fourth round tie but fell behind to an early goal from Macaulay Gillesphey.

Chelsea captain Cesar Azpilicueta levelled the scores before half-time but Thomas Tuchel’s side were unable to find a winner during the second-half and the game went to extra-time.

Marcos Alonso broke the hearts of the 6000 travelling Plymouth supporters with a tidy finish in extra-time but the underdogs were gifted a golden opportunity to send the game to penalties after Malang Sarr played a pass out of the back straight to Ryan Hardie and was ultimately panicked to take him down.

Hardie stepped up for Plymouth but was denied by the firm hand of the £71million goalkeeper – who was mobbed by his relieved team-mates.

Chelsea coach Arno Michels waxed lyrical about his goalkeeper after the 2-1 victory, telling reporters: “It’s not only about the penalty, it’s also about the performance.

“In the last matches, I’ve felt him very reliable in his game. His strength is to save penalties, he’s shown it a few times now. In training it’s hard to beat him and in penalty shootouts he has the ability to read the mind of what the player is going to do.

“We are very happy with Kepa and he deserves this trust because he is a fantastic guy. It is hard for him because Edou [Mendy] is playing very good, but Kepa is doing very good work and is an amazing guy.