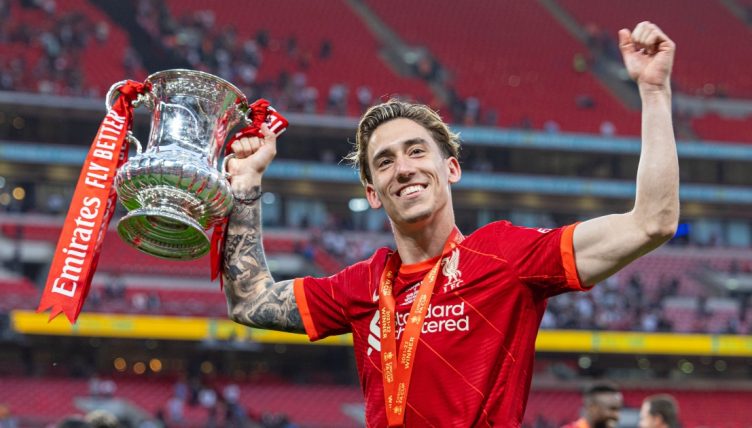 Kostas Tsimikas labelled himself as the ‘Scouse Greek’ after he stepped up to score the decisive penalty in Liverpool’s FA Cup final shootout victory over Chelsea.

The Greece international replaced Andy Robertson in extra time and added energy down the left flank for Jurgen Klopp’s side.

When the two heavyweights couldn’t be separated after 120 minutes, Tsimikas was Liverpool’s unlikely hero as he slotted past Edouard Mendy to win his side the domestic trophy.

The 25-year-old has struggled for regular minutes since his arrival from Olympiakos in the summer of 2020, but he’s always been a Liverpool fan favourite, and he’s now got a bigger place in their hearts.

On Tsimikas’ social media posts, he always signs off with the hashtag ‘Greek Scouser,’ but in a post match interview with Curtis Jones following his match winning contribution, the defender revealed a change to his self-given nickname.

At the end of the interview with ITV Sport, he was interrupted by Thiago and Adrian. The latter then kissed the left-back on the cheek as they celebrated their win.

Tsimikas has been linked with a summer move away from Anfield. This probably comes as no surprise when you consider his quality and just how little football he’s played under Klopp.

But Robertson’s deputy has been a regular in the cup competitions for the German in the 2021-22 season alongside the likes of Takumi Minamino and Divock Origi.

While the two strikers named didn’t have their day out in the Wembley sunshine, the adopted Scouser certainly made an unbelievable impact to become Liverpool’s unlikely hero.