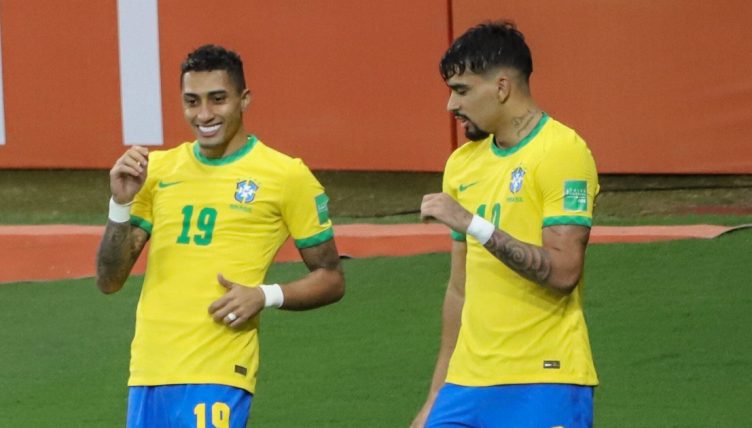 Leeds United star Raphinha opened the scoring for Brazil last night as they kept up their exceptional unbeaten run with an impressive 4-0 mauling of Paraguay.

Offering a reminder of why Leeds reportedly scoffed at West Ham’s £50million bid, Raphinha did brilliantly to control a ball from Marquinhos, turn his man and finish incisively into the bottom corner in the 28th minute.

He’d already given Paraguay a warning, having stuck the ball in the back of the net after just 93 seconds, only for it to be chalked for handball after a lengthy VAR consultation. And it was a lively performance all round, with Raphinha having been close to notching a second by striking the post.

It was another impressive display from Leeds’ most prized asset, who has taken like a duck to water to international football, looking increasingly certain to make Tite’s Selecao squad for the Qatar World Cup later this year.

He caught the eye in his first appearances back in October, and now has three goals in seven appearances for his country.

Having long since booked their place at the World Cup, Brazil remain top of the Conmebol rankings, having won 12 of 15 qualifiers so far, drawing the other three.

Aston Villa’s Philippe Coutinho doubled Brazil’s advantage against Paraguay before Antony of Ajax and Rodrygo of Real Madrid added the gloss with a third and fourth late on.

“I don’t really believe that the team is more offensive by having three strikers,” Tite told reporters after the match. “I see football as a balance.

“Those offensive players can only create if they have a creative midfield behind.

“A balanced team takes possession of the ball more times. I do not conceive of football where the pieces do not have harmony.”

What a classy goal that is! 😍

The touch, the turn, and the finish 🤤@LUFC man Raphinha finds the back of the net for his third goal for the Seleção ⚪ pic.twitter.com/VAo0twBZ3t

Where are they now? Leeds United’s last 18 January window signings