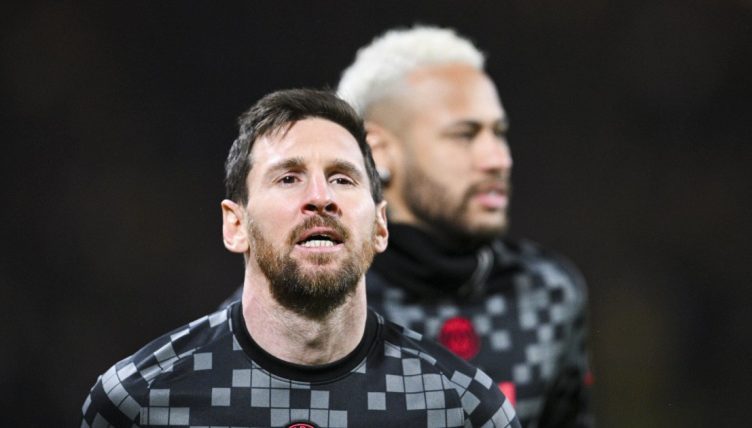 Lionel Messi and his PSG teammates were physically battered by Nantes in their shock 3-1 defeat in Ligue 1.

Nantes scored three times in the first half to give PSG an insurmountable task in the second half, with Neymar only able to score a consolation goal.

It was a physical match with Nantes unafraid of disrupting PSG’s play by being hard in their challenges.

They made 16 fouls throughout the game but received only two yellow cards.

On one occasion, Messi was completely bundled over by Nantes defender Nicolas Pallois.

Pallois went straight into the back of Messi, colliding with the Argentine’s spine with his arm and throwing him to the floor.

Messi fell and rolled over several times such was the ferocity of the challenge.

On another occasion, Neymar was pulled back by a Nantes defender when he had got around his man.

The Nantes player grabbed Neymar by the shoulder close to the neck and pulled the Brazilian to the floor, preventing him from getting away.

Much was made of the refereeing after the match in the French media, but PSG manager Mauricio Pochettino was keen to downplay the impact of decisions not going his side’s way on their loss.

“We have to separate things and not lay the blame on the referee. We didn’t lose because of the referee, although it did play a part,” he said when asked about the officiating after the match.

“The criteria was not the same for the two teams, they weren’t judged in the same way and because of that I can understand the director’s and the players’ anger.

“We did some good things, even some very good things offensively, but we didn’t manage to counter them defensively, and there were a lot of accidents in the match.