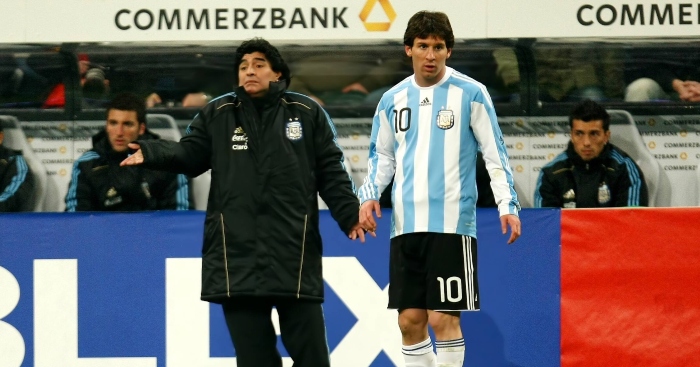 Lionel Messi are Diego Maradona are regarded as two of the greatest footballers of all-time, and the Argentinians shared the pitch together in 2005.

The two supremely talented forwards played together for an Argentina All Star side in a charity match alongside other legendary compatriots such as Diego Simeone, Sergio Aguero and Juan Sebastian Veron.

At 18 years-old, Messi was still very much in the infancy of his glistening career. Albeit, Barcelona’s all-time record goalscorer had already started to blossom in Catalonia, helping the club to a customary La Liga title in his teenage years.

23 years his senior, Maradona had long retired from the game after tormenting defences across Europe during a career jam-packed with goals, assists and magical moments.

Despite the youth of Messi and a long past his best Maradona, the two men linked up with an amazing telepathic-like understanding.

Both stars graced the turf in unison in charity games in the years that followed, but this occasion was when we best got to witness a combination that would have been impossible to stop at the highest level if both were in their pomp.

The two South American’s worked together between 2008 and 2010 when Maradona was Messi’s national team manager. The two icons of the sport always had a very special relationship until Maradona’s tragic passing in 2020.

“Even if I played for a million years, I’d never come close to Maradona,” Messi said. “Not that I’d want to anyway. He’s the greatest there’s ever been.

“Messi? I would give him heaven if possible,” Maradona said.

“I know who Leo is, I know he’s the best player in the world. The friendship I have with Lionel is bigger than anything they can write, and I’m saying that he’s the greatest in the world.”

If these two were playing at the top level at the same time, Argentina would have been unstoppable.