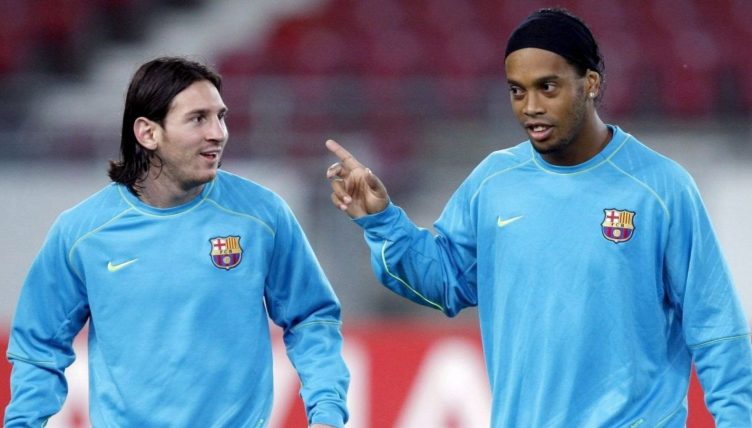 Lionel Messi was always destined for greatness. And that is clear in some lovely footage of the Argentine, while still a teenager, messing around on the Camp Nou pitch with Brazilian Barcelona icon Ronaldinho.

He was at the absolute peak of his powers at Camp Nou, mesmerising onlookers with his skill and winning himself the Ballon d’Or in 2005.

One of those onlookers was a young Lionel Messi. And despite Messi’s magnificent talents, which were by then becoming obvious to those who watched him in the youth teams, he was clearly as smitten as the rest of us.

Messi broke into the Barcelona team alongside his hero, playing and training with Ronaldinho for four seasons from 2004-05. And Ronaldinho famously set Messi up for his first competitive goal for the club.

Later, Messi said: “Ronaldinho was responsible for the change in Barca. It was a bad time and the change that came about with his arrival was amazing.”

“In the first year, he didn’t win anything but people fell in love with him.

“Then the trophies started coming and he made all those people happy. Barca should always be grateful for everything he did.”

But even before they played together in the first team, Ronaldinho had got a taste of Messi’s talents, which you can see in the video below.

Ronaldinho joins the Barcelona youth team for a training session on the Camp Nou pitch and a keepy-uppy session inevitably breaks out.

READ MORE: The 5 players Barcelona signed along with Ronaldinho & how they fared

Messi starts things off with some around the world skills before playing it to Ronaldinho, who carries on the samba-football party.

Messi then gets the ball back from the Brazilian and lobs it up onto his own head, balancing it there while throwing Ronaldinho’s signature shaka hand signal.

You can only imagine Ronaldinho was thinking, ‘Who is this kid?’

He soon enough found out.

When asked about his Argentine former team-mate in 2015, Ronaldinho replied: “He is the best in the world, and there’s nothing more to be said.”

A post shared by A La Tribuna 🇦🇷 (@alatribuna)

WATCH NEXT: Ronaldinho dazzles in warm-up with outrageous skills