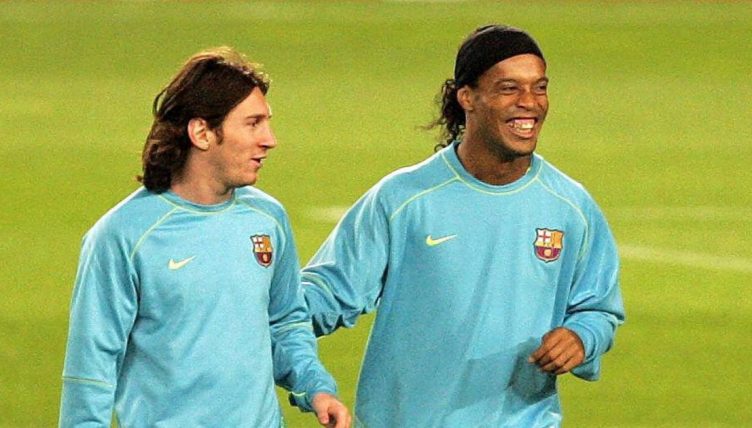 Lionel Messi was always destined for GOATdom, but it certainly helped him to have football grandmasters like Ronaldinho to learn from in his formative years at Barcelona, as brilliant footage of the Brazilian teaching a teenage Messi how to do a rabona-elastico skill shows.

When Lionel Messi was learning his trade in Barcelona’s La Masia academy, Ronaldinho was the first team’s star attraction and the most entertaining player in the world.

The Brazil international arrived at Camp Nou from Paris Saint-Germain in 2003 and, at his peak, was doubtless the best player on the planet.

Ronaldinho’s skill and inventiveness mesmerised Catalan crowds and he helped Barcelona to two La Liga titles, two Supercopas and the Champions League. He also won the Ballon d’Or for his personal collection in 2005.

Around that time, Messi was emerging into the first-team picture at Barca. He made his senior competitive debut as a 17-year-old in 2004.

Messi idolised his more senior Brazilian team-mate, later saying: “Ronaldinho was responsible for the change in Barca. It was a bad time and the change that came about with his arrival was amazing.”

“In the first year, he didn’t win anything but people fell in love with him.

“Then the trophies started coming and he made all those people happy. Barca should always be grateful for everything he did.”

Famously, Ronaldinho provided a beautiful assist for Messi’s first Barcelona goal in a competitive match, but it appears the buck-toothed Brazilian was having a positive impact on Messi’s development even before Messi made his senior bow.

In the footage below, Ronaldinho can be seen attempting to impart his samba football wisdom upon a group of La Masia hopefuls, which includes an adolescent Messi.

Ronaldinho starts things off by demonstrating how to do one of his signature moves, a sort of rabona-elastico hybrid.

Attempting such a move would instantly see most of us fall flat on our faces, but for Ronaldinho, such things came naturally.

As proof of how difficult the skill is, four of the La Masia youth team players – some of the most talented youngsters on the planet, let’s not forget – attempt it and fail miserably.

Then it’s Messi’s turn and, well, you can guess what happens. Messi steps up and flicks it perfectly around his leg and then forwards past Ronaldinho, showing the grace and poise that we have all become so used to.

Messi would doubtless have become a football great without much guidance. His combination of supernatural talent and dedication to his craft ensures that.

But we can’t imagine having a helping hand from a magician like Ronaldinho did him any harm at all.

READ NEXT: The 5 players Barcelona signed along with Ronaldinho & how they fared