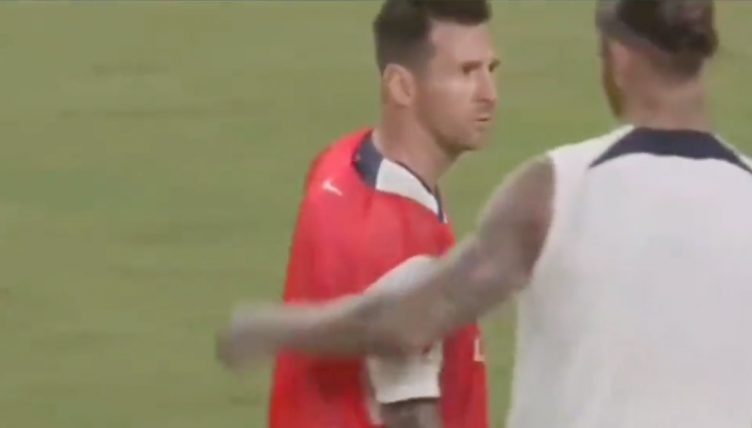 Lionel Messi and Sergio Ramos gave us all a warm dose of nostalgia from the era they were bitter rivals at Barcelona and Real Madrid in a new clip from PSG training.

There’s no love lost between the pair, who captained Spanish football’s two biggest clubs and directly faced off dozens of times in El Clasico.

No player has scored more goals against Real Madrid than Messi, and no player in Los Blancos history has been sent off more times than Sergio Ramos, who was shown a straight red on more than one occasion for dangerous challenges on Barcelona’s former talisman.

But the rivalry on the pitch doesn’t necessarily mean there’s a lack of admiration off the pitch.

Ramos even offered to temporarily host the Messi family at his Parisian home until they got a place of their own when the Argentine star made the move to Paris Saint-Germain in the summer of 2021.

But old habits die hard, and Messi didn’t at all look pleased when Ramos challenged him a little late during PSG’s pre-season training camp.

PSG’s No.30 was knocked off balance but stayed on his feet and angrily blasted the ball into the back of the net before turning around and fixing his team-mate with an icy death stare.

The pair then exchanged a few angry words. Fortunately, things didn’t spill over into a full-blown confrontation.

Messi angry and arguing with Ramos after he tackled Messi hard in training 😬 pic.twitter.com/dMRXDqzHEU