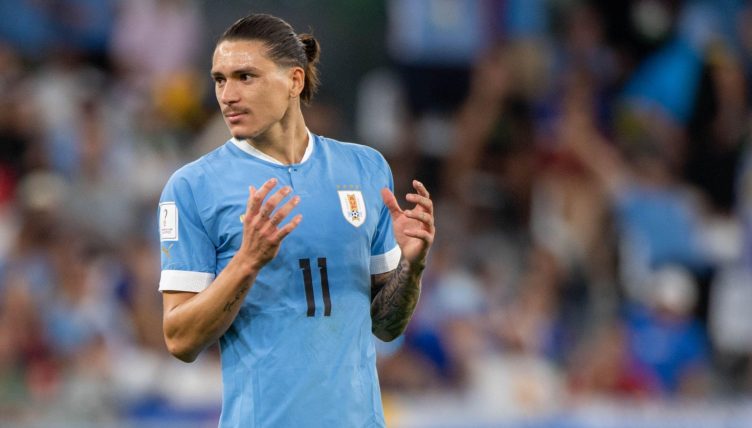 Ghana versus Uruguay always had the potential for some elite shithousery and Liverpool’s Darwin Nunez joined in the fun by scuffing the penalty spot before Andre Ayew missed from 12 yards for Ghana.

Friday’s match always looked one of the tastiest of the 2022 World Cup group stage considering the history between the two nations.

Ghana were desperately hoping for revenge after their cruel defeat at the hands of Uruguay at South Africa 2010 – Luis Suarez, handball, missed penalties – while Uruguay needed a win to stay in the competition.

And everything kicked off following the awarding of a penalty to Ghana in the game’s opening 20 minutes.

Ghana were awarded another spot-kick after a lengthy VAR review, with referee Daniel Sibert adjudging Uruguay goalkeeper Sergio Rochet to have brought down Ajax star Mohammed Kudus in the box.

Uruguay protested the decision vehemently, and while his teammates gestured with the referee, Nunez decided to take matters into his own hand.

The Liverpool striker stamped on the penalty spot while Ghanian players were huddled around trying to protect it, attempting to rough up the ground from which Ayew would eventually miss.

Nunez faced plenty of anger from the African side and was booked for his troubles – not that he’d have cared after seeing Ayew waste the chance of redemption.

Uruguay then went up the other end, scoring twice inside six minutes, both courtesy of Giorgian de Arrascaeta – and both assiststed by Suarez – to put the South Americans in pole position to progress behind Portugal in Group H.

And, considering the history of Uruguayan football, there’s clearly no need for a DNA test regarding Nunez; with shithousery flowing through his veins, the youngster is clearly a patriot and keen student of his forefathers.

TRY A QUIZ: Can you name Uruguay’s XI from their 2010 World Cup QF vs Ghana?