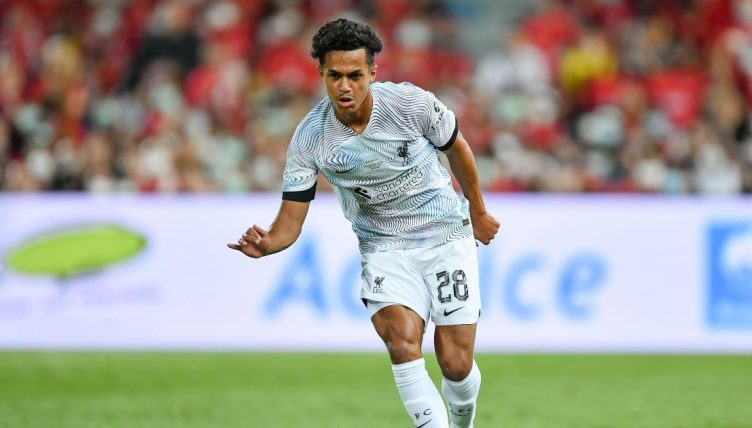 Fabio Carvalho has wasted no time in impressing his new Liverpool team-mates with an exciting cameo during their pre-season victory over RB Leipzig on Thursday – and one piece of composed skill encapsulated his fine performance.

Carvalho joined the Reds from Fulham in a £5million deal and was part of Jurgen Klopp’s squad on their pre-season tour of Asia.

And the 19-year-old started the game against Liverpool and hit the post for Klopp’s men in an impressive display despite their 4-0 defeat.

After the defeat against United, Carvalho took a moment to thank his new team-mates for helping him settle quickly, saying: “Everyone has been fantastic to me which I’m so grateful for. It sounds cliche but it feels like one big family.”

While the competition for first-team places at Liverpool is fierce, and nobody would expect Carvalho to start Liverpool’s Premier League opener against Fulham on August 6, the forward caught the eye during the Reds’ 5-0 victory over Leipzig.

Appearing as a 60th-minute replacement for Luis Diaz, Carvalho was instantly a threat playing on the left flank with his pace and direct style, which led to him assisting the fifth goal for Darwin Nunez in injury-time.

But it was a moment from earlier in the build-up to Liverpool’s fifth goal, rahter than the final pass, that caught the eye.

After collecting the loose ball in the midfield, the teenager took his opponent out of the game with a cushioned header before racing forward and laying the ball off for Nunez to complete the scoring.

Despite Carvalho’s performance, Klopp reserved the greatest praise for four-goal hero Nunez afterwards and told reporters: “We always think that if you pay a lot of money then the players feel no pressure or whatever.

“They are all completely normal human beings and the first touch is not perfect then all of a sudden… This generation of players read social media, which is really not smart, but they do.

“All of a sudden you get in a rush and these kinds of things. That’s the best way obviously to stop all these discussions. He’s a different striker to what we have or what we had, but he’s a really good one.”