Watch: Liverpool fans emotionally belt out YNWA in memory of the 97 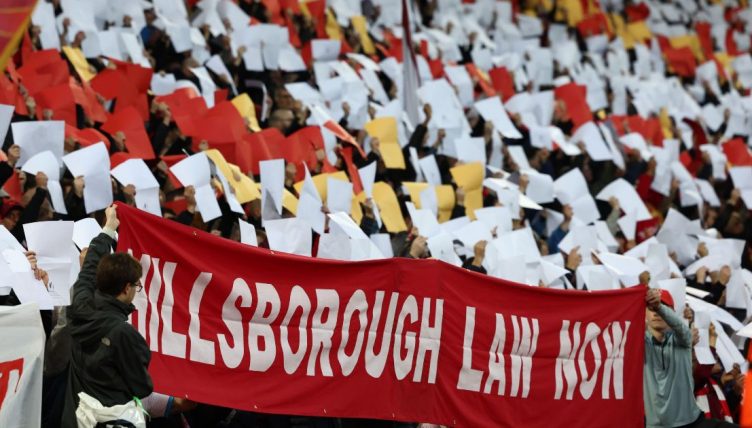 Liverpool’s European nights at Anfield are always emotional. But when they coincide with the anniversary of the Hillsborough disaster, they gain extra significance – and that was the case for the Reds’ Champions League quarter-final second leg against Benfica on Wednesday.

Prior to the Benfica game, Liverpool fans on the Kop – and the other three sides of the famous old stadium – belted out the iconic anthem ‘You’ll Never Walk Alone’ with an extra poignancy, in memory of the 97 victims of the Hillsborough tragedy and their long fight for justice.

Before kick-off, the stadium also observed a minute’s silence, with those on the Kop holding up a mosaic with the number 97 in red, white and yellow.

Every year, Anfield observes similar commemorations before the game closest to the date of the anniversary of the disaster, April 15th. This year marked the 33rd year since the disaster, which took place during the FA Cup semi-final in 1989.

The disaster happened in the Leppings Lane end of Sheffield Wednesday’s Hillsborough Stadium when a South Yorkshire Police commander ordered gates to that end of the ground to be opened, causing a crush that killed 97 people and injured 766.

Initially, the crush was blamed on the Liverpool fans by the authorities, politicians and media.

But after a long, hard fight by Liverpool fans – in particular The Hillsborough Family Support Group and The Hillsborough Justice Campaign – a jury ruled in 2016 that all of the victims had been unlawfully killed owing to the gross negligence of the emergency services.

In 2021, the 96 victims that used to be remembered on the anniversary of the tragedy sadly became 97, with Andrew Stanley Devine passing away as a result of the life-changing injuries he sustained at Hillsborough.

Liverpool fans will never forget – and nor should they.

On Wednesday, they paid tribute to the deceased in the best way possible, with a touching, emotional rendition of ‘You’ll Never Walk Alone’.