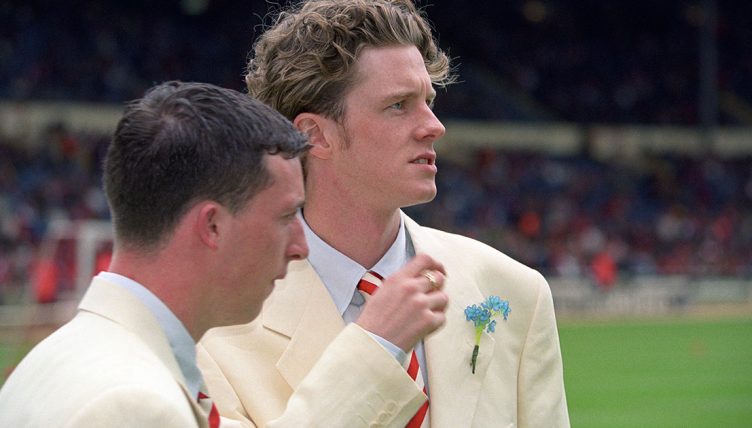 McAteer and his Reds team-mates turned up to face Manchester United at Wembley in 1996 wearing now-infamous white Armani outfits.

The decision drew stinging criticism at the time – Liverpool lost the game 1-0 – with the fashion disaster used as a prime example of the Spice Boy mentality which made them renowned for being nearly-men.

But that hasn’t stopped McAteer poking fun at himself and his former team-mates in a video released this weekend.

The video, which has been viewed more than 1million times across Paddy Power’s social media accounts, sees McAteer introduced by a TV presenter, where he’s asked if there’s any moment in his career where he wished he’d had a second chance.

What would have happened if Liverpool didn’t wear those infamous white suits?

With PP Games you don’t have to dream about getting a second chance…@MCATEER4 | (18+ BeGambleAware) pic.twitter.com/OUcY1gMnnm

The Irishman ponders the question before drifting into a dream-like state as the footage shoots back to May 1996.

McAteer, wearing a baggy t-shirt and a pair of incredibly baggy blue jeans, is seen in a suit shop where a tailor tries to convince him to pick a white outfit on behalf of his team-mates.

He stands there contemplating the decision before hearing himself thinking, “I’m not sure about these, should I say something? Will the lads think I’m boring?”

McAteer then asks for a different suit instead before the tailor insists: “Your team-mates obviously asked you to pick the suits because you’re the most stylish.”

The ex-defender retorts: “That’s true. But I think we need something more conservative for a Cup Final, show the United lads that all this Spice Boys stuff is a load of rubbish and that we are a serious team. I’m putting my foot down on this. Can you just get us a nice navy one? The white one is not for us.”

The tailor walks off to the back room before the camera fades out and a bunch of newspaper headlines flash up on screen including: “Pool win the Cup! Smart suits the reason”, “Navy suits admired by all” and “McAteer wins the Ballon d’Or”.

The footage then snaps back into the room where it emerges that a dazed McAteer is just dreaming.

The video has been released by the mischievous Irish bookie to promote the fact that all their customers get a second chance to win with Paddy Power Games.

McAteer has previously denied the reputation was justified, though, insisting: “Everyone will bring up the white suits but a white suit doesn’t win a football match. The flip argument to that, of course, is that was [Alex] Ferguson’s team talk done but at the end of the day we were seven minutes from extra time. They were as bad as us and the game could have gone either way.

“Jamie had a good chance in the first half but put it over the bar. The goal came from a back pass that went out of play, the corner itself was a shambles, Jamo punched, fell into Rushie and then [Eric] Cantona gets his leg up here and scores on the half volley with the ball somehow finding a route through about half a dozen players. It could have gone either way.

“The thing is if you wear dark suits and lose like that there’s no big fuss but if you’ve worn white suits the accusation is you’ve been acting like playboys or whatever.”