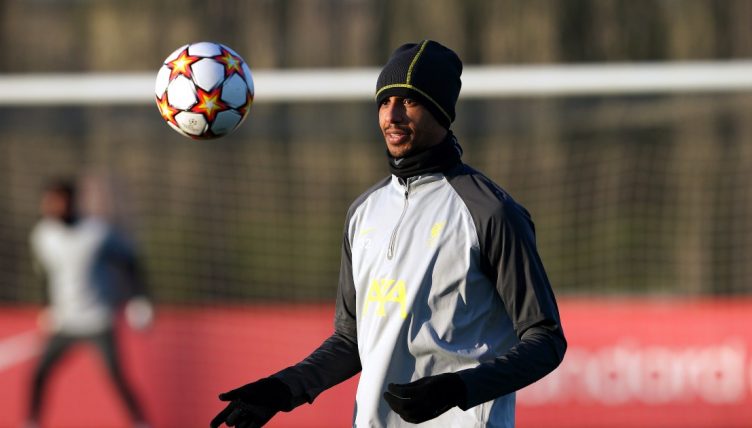 Liverpool’s players looked happy and at ease in training as they look to close the gap on league leaders Manchester City to just one point when they take on Arsenal on Wednesday evening.

Andy Robertson demonstrated his very basic Spanish as he attempted to communicate with January recruit Luis Diaz, while Joel Matip pulled out a characteristically hilarious celebration after winning a point in a training exercise.

“He [Diaz] doesn’t speak much Scottish, that’s for sure!” Robertson said, shortly after the Colombia international’s arrival.

“He sits next to me in the training room but his English is very, very little.

“The people who speak Spanish are helping him settle in a lot. I can help, I just kind of smile and laugh at him and try to make him feel comfortable.”

“Don’t forget to have some fun, just to say” he told the players just before they started playing some football tennis.

Matip clearly took that to heart. When Diaz hit the ball against Naby Keita’s head, causing it not to make it over the net, Matip celebrated hilariously as usual.

Ever the competitor, he shouted out and celebrated in the face of Keita while Diaz playfully told Keita off.

Matip won the Premier League February Player of the Month award as he both scored and assisted one while playing every minute of Liverpool’s matches as they won all their matches.

“We had a meeting and not everybody knew it [the award] then,” Klopp said.

“I asked, ‘Is it really true that Joel [won POTM]?’ It was similar to the celebrations after the Carabao Cup, to be honest. It was really cool.

“Joel is a very, very famous figure in the group, in the team.”