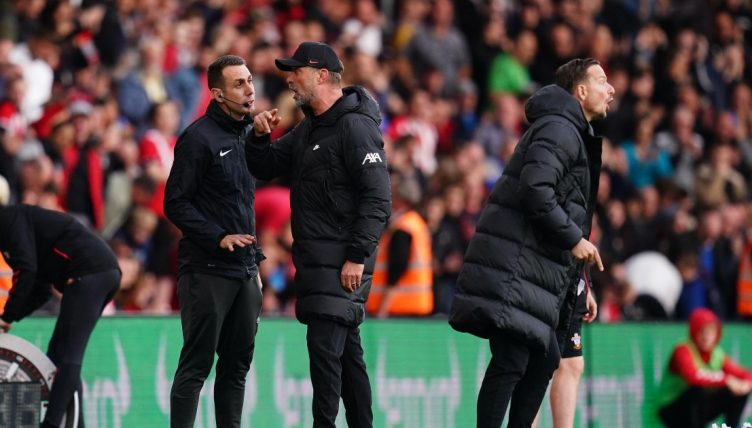 Liverpool manager Jurgen Klopp was furious that a seemingly ‘blatant’ foul in the build up to Southampton’s opener was not given by VAR in their crucial Premier League clash.

Lyanco appeared to have taken Diogo Jota out before getting the ball, after which the ball was sent up the other end of the pitch where Nathan Redmond’s deflected strike nestled into the net, getting beyond Alisson in goal.

Klopp was seen remonstrating on the touchline, furious that a foul had not been given either by the on-pitch referee Martin Atkinson or by VAR. The German clearly felt the tackle should have been looked at.

He had good reason to want it checked, as having directly led to the goal, if VAR had checked the foul and decided Atkinson’s error was ‘clear and obvious’ it would have seen Redmond’s strike disallowed.

Many Liverpool fans online agreed with Klopp, calling it a ‘clear’ and ‘blatant’ foul.

Regardless, Liverpool struck back shortly after the opening goal through Takumi Minamino, sending the teams in at half-time level. The Japanese winger was starting a Premier League match for Liverpool for the first time in nearly 18 months.

Klopp, who made a number of changes to Liverpool’s starting XI for the game, was heavily critical of the scheduling of the match with Liverpool having played the FA Cup Final on Saturday which went all the way to penalties.

“It’s better you moan and argue when you’ve won something than when you lose, that’s why I use that opportunity,” Klopp said, in reference to Liverpool’s victory in the FA Cup.

“There are two more matchdays this week. Obviously, we played Saturday where it was always possible we’d play 120 minutes and they thought the best day for us to play the next game was Tuesday.

“You could have given us the Wednesday theoretically.

“Thursday we could have played a 90-minute game and on Sunday which is the last matchday but nobody thought ‘we can give them a day more of rest.”