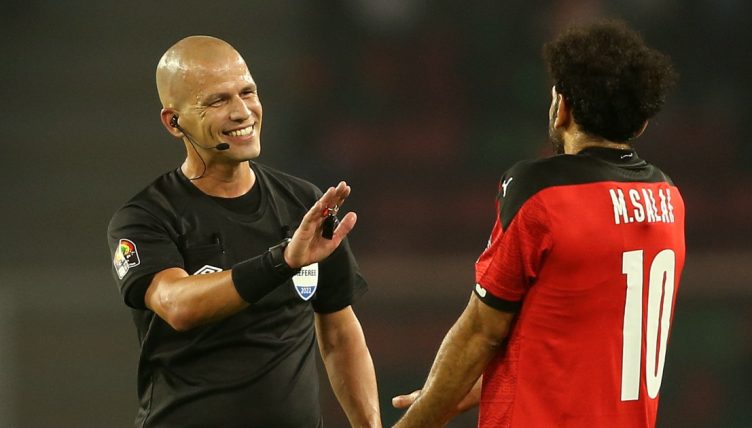 Liverpool’s Mohamed Salah suffered heartbreak on Sunday night as Egypt were beaten in the 2021 Africa Cup of Nations final by Senegal.

Salah was beaten by club colleague Sadio Mane and Senegal, who won their first AFCON title thanks to a 4-2 penalty shoot-out victory following a goalless draw.

Mane, who had a penalty saved early on, redeemed himself by scoring the winner from the spot in the shoot-out to spark wild scenes amongst the Senegalese contingent in Yaounde.

It was a frustrating night for Salah and he was overcome with emotion at the final whistle, with Mane consoling him in a touching moment between the two Liverpool forwards

And in the first half, Salah was brilliantly shut down by the match official when he was complaining over a decision.

Salah protested a yellow card for one of his teammates but Gomes was not having it whatsoever.

The South African sarcastically got his yellow cards and whistle out and went to hand them over to Salah, asking “Do you want to referee?”.

Taking no messing about, Gomes was not bothered who Salah was in the slightest and told him exactly where to go.

And it wasn’t the first time Salah had been on the receiving end of no-nonsense officiating during the tournament.

The 29-year-old exchanged heated words with Bakary Papa Gassama during Egypt’s semi-final victory over Cameroon but the referee laid down the law with the Egypt captain.

Salah also attracted criticism from Liverpool legend Jamie Carragher for not taking a penalty against Senegal.

Carragher commented on Twitter: “That is why your best penalty taker should never go fifth.

“Mo Salah not taking a penalty for Egypt in a shootout in a final is madness. Also happened to [Cristiano] Ronaldo years ago for Portugal v Spain.”

The referee asked Salah if he wants to officiate the game 😂 I love AFCON pic.twitter.com/LSG6xjqqlL