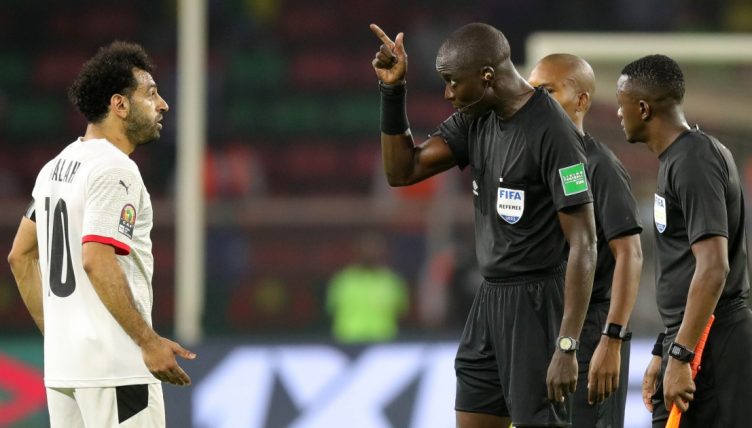 Egypt progressed into the African Cup of Nations final with a penalty shoot-out victory over hosts Cameroon – but Mohamed Salah’s biggest contribution on the night was a hilarious argument with referee Bakary Papa Gassama.

Salah was relatively quiet throughout and even missed a golden chance to score from a defensive howler by Cameroon, the forward eventually thwarted by an onrushing Andre Onana when he should have done far better.

And it was perhaps his inefficient display that caused the Liverpool man to let rip at Gassama after normal time had concluded.

Despite the fact Salah was venting some serious anger, Gassama stood firm and the whole interaction between the pair would have caused the hardest of hearts to raise a smile.

The back-and-forth between the two bought to mind a teacher laying down the law with an ill-disciplined child, with Salah shielding his mouth in the traditional Premier League style.

Egypt’s captain wasn’t the only member of the squad to lose his rag a bit during the match. Late in the second half, manager Carlos Queiroz was sent off and will subsequently not be on the touchline for Sunday’s final.

Their progress to the showpiece match against Cameroon has had strong Argentina 1990 vibes about it – few goals, a star player who has shone intermittently and a substitute goalkeeper who’s bailed out his side during multiple penalty shoot-outs.

It’s for these reasons that many neutrals will be rooting for Senegal on Sunday.

Not that Salah will care. Already regarded as an iconic figure in his home country, the 29-year-old will cement his status as one of the best African footballers of all time if he guides Egypt to their eighth AFCON crown.

He’d be well-advised not to pick any more fights with referees though.

Salah thought he was arguing with Prem Referees 😂😂 pic.twitter.com/NnhX6V3mQg

Watch: Mo Salah rips turf out of the ground after missing great chance