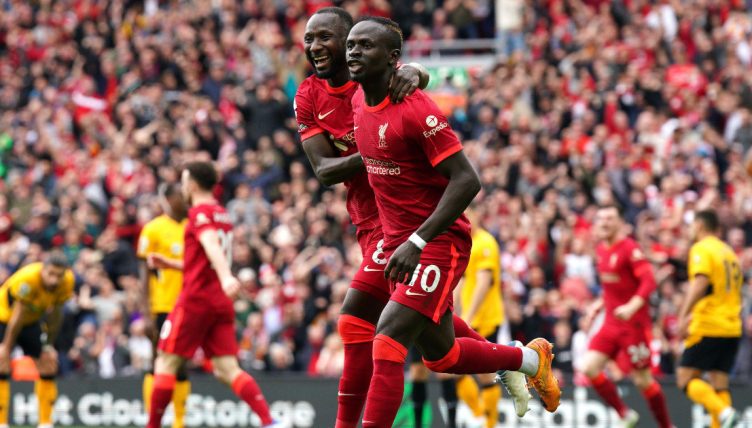 Liverpool needed a win against Wolves to give themselves any chance of winning the Premier League title on the final day and the visitors took a shock lead.

Sadio Mane equalised at Anfield, and he thought he’d given his side the lead but saw his effort ruled out for offside.

Diogo Jota had slipped the ball through to Mane who delightfully chipped the ball over Jose Sa in goal, but the celebrations were cut short as the flag went up for offside.

With Manchester City trailing 1-0 at the time, Mane’s goal would have sent Liverpool top of the league, but the Senegal international had strayed marginally offside.

Liverpool did score twice in the second half through Mo Salah and Andy Robertson but City’s 3-2 win over Aston Villa means the title remains at the Etihad.

Mane has just one year left on his contract at Liverpool, but the club are reportedly keen to tie the 30-year-old down to a new deal.

The forward has notched up 22 goals this season and is enjoying a resurgence in form after a slightly disappointing campaign last season.

The arrival of Luis Diaz in the January window could have jeopardised his place in the starting XI, but Mane has adapted well to a more central role and is still playing to a world-class level.

Mane has also been linked with moves to Bayern Munich and Real Madrid, and this could remain a strong possibility if he does not sign a new deal.

He has also been mooted as a favourite for the Ballon D’or after also winning the Africa Cup of Nations with Senegal and Klopp hinted that Mane would be a deserving winner.

“Mane has had an outstanding season and is an outstanding player,” Klopp said in April. “I have nothing to do with the Ballon d’Or nominations. I don’t understand it 100%.

“He is world-class. He again played a really good game for us but I don’t know how I can answer with the season not even over.

“Historically we have to win something to win the Ballon d’Or, most of the time it was like this. If you’re not Messi or Ronaldo you have to probably win the Champions League, which we haven’t done yet.

“Give us a few more weeks and we will see where we end up. Sadio wants to contribute, he wants to help the team and that’s what I love most about it.”

Liverpool thought they had scored a vital goal, until the offside flag was raised 👀 pic.twitter.com/jnz89NKtes