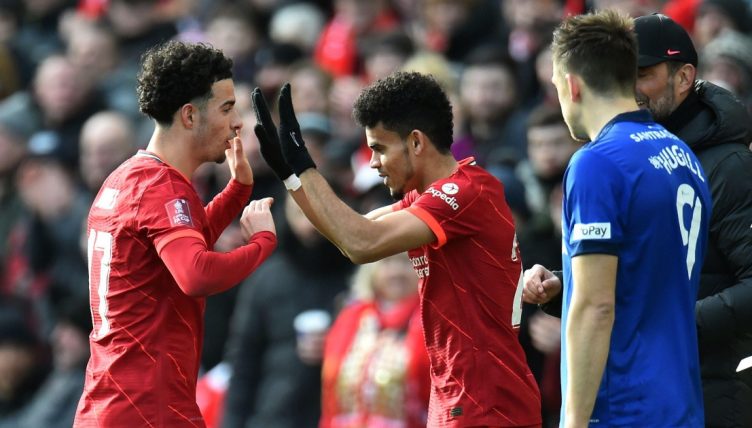 Luis Diaz and Curtis Jones’ bromance was on full display after Liverpool beat Chelsea on penalties in the FA Cup final.

Diaz joined Liverpool from Porto in the January transfer window and has hit the ground running, registering six goals and four assists in his first 24 appearances for the Reds.

The Colombia international is being helped off the pitch by several team-mates, including English duo Harvey Elliott and Curtis Jones.

“He [Diaz] communicates with everybody without really speaking the language,” Liverpool manager Jurgen Klopp said recently.

‘Yes, there’s the Spanish faction that’s no problem they are really close and helped him so much. Thiago, Fabinho, Alisson, Bobby [Firmino], all these guys a lot, Adrian is great in this aspect.

Diaz started against Chelsea in the FA Cup final and produced a Man of the Match performance. He terrorized Chelsea’s defenders with his brilliant dribbling ability and hit the outside of the post in the 84th minute.

The 25-year-old was replaced by Roberto Firmino in extra time and watched on as Liverpool went on to win 6-5 on penalties.

After the Liverpool players lifted the FA Cup trophy in front of their fans, they then continued their celebrations in the dressing room.

Jones, who was an unused substitute at Wembley, walked over to Diaz and the duo decided to showcase their dance moves.

The most unexpected friendship duo 🕺🏼pic.twitter.com/XyanTneUZp