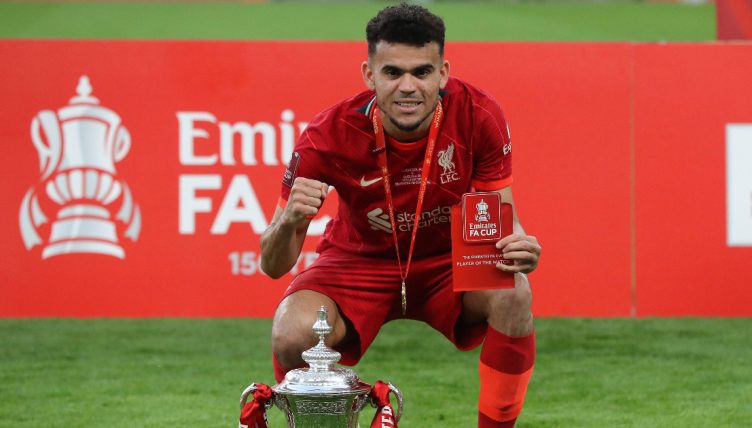 Liverpool won the FA Cup for the first time since 2006 following their penalty shootout victory over Chelsea at Wembley, and their new star signing Luis Diaz was electric throughout the game.

However, as he lifted his second trophy under Jurgen Klopp, the lid of the trophy dropped onto the Colombian’s head.

Clearly not realising that the lid wasn’t attached to the trophy, the 25-year-old lifted the cup and was surprised when the lid hit the back of his head and fell to the floor.

Diaz joined Liverpool in January from Porto and settled immediately, dazzling the Anfield crowd with his incredible flair and technique while scoring six goals and assisting four in his first 22 games.

Whilst the celebrations after the victory were enjoyable, they will be short-lived as Liverpool still have two Premier League games left before their Champions League final against Real Madrid as they look to win every trophy possible this season.

Klopp stated after the game that while Liverpool should enjoy winning the Cup, they will have to keep their focus for the remaining games in what has been a long season.

“It is pure joy to be part of this club at the moment,” Klopp said after the celebrations.

“There is a lot to come and a lot to play for. Tonight I decided to just enjoy this moment and not think about the next challenge. It is really special. We don’t stop here, we just take the time to enjoy this for a few minutes. We came from a season last year where nobody, apart from me, thought we could go again like we did this year.

“That is all because of the character of these players. It’s the only reason. I can say as much as I want, I can motivate as much as I want, but if these boys got soft or weak then you would have no chance to compete with City in a league like this.”