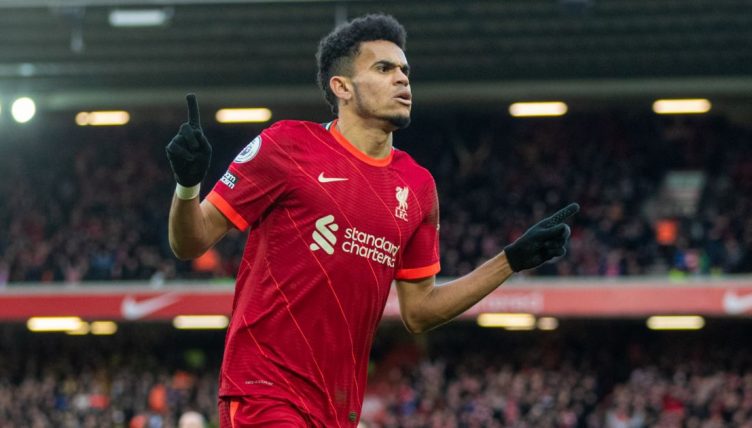 Despite only joining Liverpool in the January transfer window, Luis Diaz has been named Gary Neville’s best new player of the Premier League season.

Diaz impressed for Colombia at the Copa America last summer and carried that form into the current campaign with Portuguese side Porto.

He scored 16 goals in 28 appearances during the first half of 2021-22, including a stunning strike against Manchester City in the Champions League.

The winger looked set to sign for Tottenham in January but joined Liverpool in a deal that could eventually be worth £50million.

He’s managed to hit the ground running at Anfield, registering six goals and four assists in his first 24 appearances for the Reds.

The 25-year-old has already won two trophies with Liverpool after producing man of the match performances in the League Cup and FA Cup finals.

“It’s so funny, we hugged each other after the game just shouting ‘vamos’ and whatever, the few words I know in similar languages. It’s so funny.

“But he gets our football, 100 per cent. We thought we saw that at Porto, but that it really is like this, I feel lucky as well to be honest.

“He fits like a glove to our football, and that’s really, really special.”

Alongside Klopp and every Liverpool fan, Neville has also been impressed by the Colombia international in recent months.

“He is absolutely sensational to the point whereby when Mo Salah does leave in 12 months or this summer, you’re almost not going to be as sad as a Liverpool fan because you have a ready made replacement in terms of how he plays,” Neville said.

💬 "When Mo Salah does leave, you almost won't be as sad because you've got a ready made replacement."@GNev2 picks his "Best New Player" of the season. pic.twitter.com/Bbw6Z4o93B