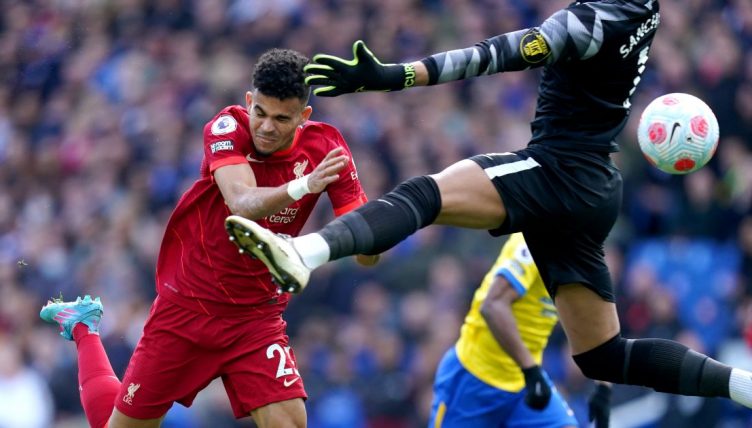 Liverpool fans and BT pundits were left raging after the VAR decided not to give a red card for a brutal foul by Brighton goalkeeper Robert Sanchez on Reds forward Luis Diaz in the Premier League game at the AMEX Stadium on Saturday lunchtime.

Liverpool travelled to Brighton on Saturday to play in the televised 12:30 pm kick-off. Jurgen Klopp’s men were looking to maintain an incredible record, having not lost a Premier League match thus far in 2022.

After a slightly slow start, Liverpool really grew into the game and took the lead just before the 20-minute mark through a goal from their Colombian striker Luis Diaz.

Joel Matip, who was recently named Premier League Player of the Month for February, advanced into the Brighton half with the ball at his feet.

The Cameroonian centre-half then spotted Diaz lurking on the shoulder of the last Brighton defender and sent an inch-perfect ball through to the Colombian.

But as the ball went past Sanchez and towards the goal, the Brighton man stuck out a long left leg and completely wiped out Diaz.

It looked like a red card challenge, but Mike Dean only showed a yellow to Sanchez.

The video assistant referee looked at it but deemed that Dean had made the correct call – or at least hadn’t made a clear and obvious error. Dean was not even called over to the screen for a second look.

At half-time, the pundits in the BT Sport studio were fuming.

Crouch, Ferdinand and Steve McManaman all then went on to agree that the wrong decision had been reached on the pitch and it should have been a sending off for Sanchez.

"If you ever want to see serious foul play, that's it."

"He could have been seriously, seriously injured there."

"It's WWE that."@rioferdy5, @petercrouch and Steve McManaman are left baffled Robert Sánchez is still on the pitch after his collision with Luis Díaz 😳 pic.twitter.com/UZZhP6Q1by