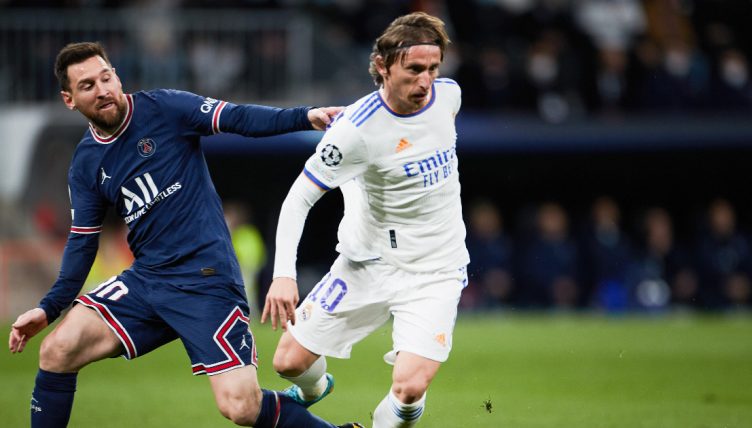 On Wednesday night, Real Madrid completed a stunning comeback against Paris Saint-Germain to progress to the Champions League quarter-final. And one of the moments that demonstrated their resolve came when Luka Modric halted Lionel Messi with a cracking slide tackle.

All the focus before the second leg kicked off at the Santiago Bernabeu was on the PSG front three, with two Barcelona legends – Messi and Neymar – returning to face their rivals, and the best young prodigy in the world – Kylian Mbappe – facing the club he’s expected to join in the future.

After Mbappe had extended PSG’s aggregate lead to 2-0, the tie looked done and dusted. That was until two Real Madrid veterans stepped up and showed why their club possesses the greatest European heritage of them all.

Karim Benzema scored a stunning hat-trick, but the performance of 36-year-old Luka Modric is what had everyone on their feet, and his all-action display was not only vital to the win but showed Lionel Messi on the other team how to age like fine wine.

Messi has received criticism for his debut season in Paris, with some claiming that age has finally caught up to him at 34, and his penalty miss in the first leg will certainly come under more scrutiny now they’re out.

But the opposite has been said about Modric.

There were no signs of his age, as he played with the technique of a 25-year-old and the energy of a teenager, and the moment which epitomised this contrast perfectly came towards the end of the match.

With Messi picking up the ball and pushing forward to find an equaliser, Modric somehow found a burst of speed to track him and execute a perfectly timed powerful tackle, which swept the Argentinan off the ground and the fans off their seats.

“Modric and Benzema are getting better and better, every day,” manager Carlo Ancelotti stated after the game.

“Luka is always a top player, wherever he plays, left or right. He’s so important.”

With tackles like this, there’s no sign that Modric will hang his boots up any time soon.