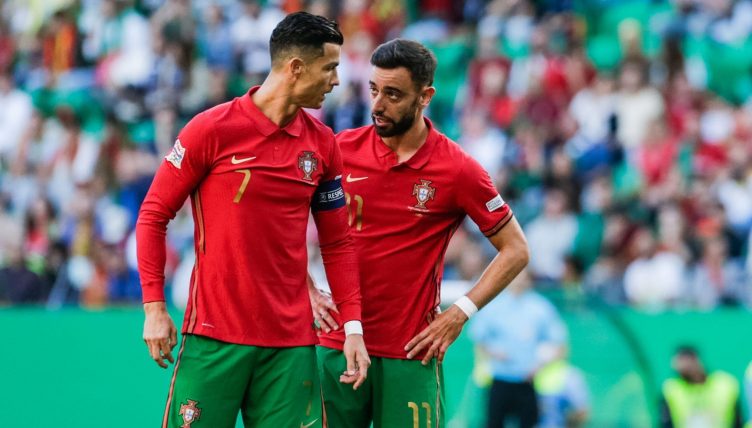 Cristiano Ronaldo’s explosive interview with Piers Morgan has dominated the headlines since Sunday evening and Manchester United team-mate Bruno Fernandes didn’t appear to give him a warm welcome when reporting for World Cup duty with Portugal.

Ronaldo launched a stinging attack on United boss Erik ten Hag and reeled off a series of bombshell revelations about the club in various clips that have been shared from the interview, which is set to be aired in full on Wednesday.

“Honestly, I shouldn’t say that… don’t know… But listen I don’t care, I’m always… People should listen to the truth,” Ronaldo told Morgan. “Yes, I feel betrayed and I feel that some people don’t want me here, not only this year but last year, too.”

The 37-year-old has been left disgruntled after being dropped from the starting line-up since the arrival of Ten Hag, but he is set to feature heavily for Portugal at the World Cup.

But Ronaldo’s interview, which was shared on the eve of the tournament, has reportedly left his United teammates stunned – and it certainly appears to have irked Fernandes, who plays alongside the veteran for both club and country.

In a clip shared on Portuguese television,  Fernandes walked past his United teammate after arriving with the rest of the Portugal squad ahead of their trip to Qatar.

And the midfielder even left Ronaldo – who had attempted to shake hands with his compatriot – hanging before reneging and briefly interacting with his Old Trafford colleague before hastily moving on.

It now appears seriously unlikely that Ronaldo will see out the remainder of the two-year deal he penned last summer when he completed a romantic return to Old Trafford and Fernandes seems to represent the feeling of Ronaldo’s club team-mates towards the situation.

In the meantime, the United pair will fly out to Qatar this week before their opening match against Ghana on November 24.