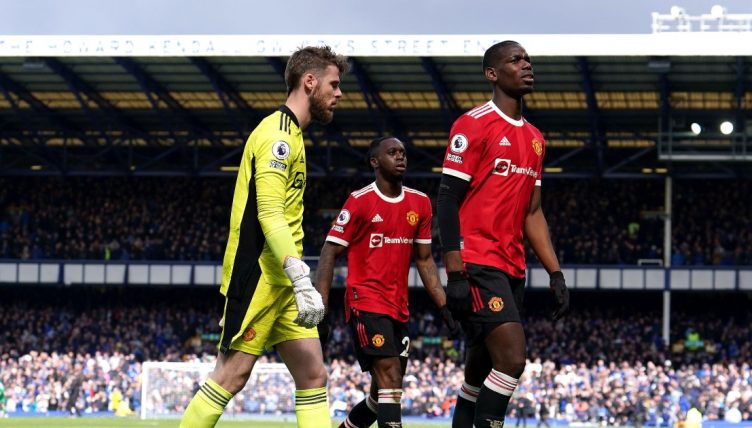 Manchester United’s David de Gea gave a scathing and brutally honest assessment of the club following their limp 1-0 loss to Everton in the Premier League.

Manchester United created few chances against the relegation-threatened side, who only needed Anthony Gordon’s deflected first-half effort to defeat Ralf Ragnick’s United side.

De Gea was helpless when Gordon’s shot deflected off an unlucky Harry Maguire, taking the ball completely away from the Spanish goalkeeper.

After the match he said there was no excuses for the nature of his side’s defeat.

“We knew before they were struggling, but how difficult it is to play here even when they are not in a good mood, but they play with more desire,” he said to BT Sport after the match.

“They played Wednesday and they were tired but they had more desire than us. It is a disgrace from us, to be honest. We should be winning this game.

“We don’t create, that’s the problem. We don’t even create proper chances to score. I don’t know what to say, to be honest.

“We’re not good enough, that’s for sure. It’s going to be very difficult now to be in the top four.”

“Of course, it’s not the perfect atmosphere [at the club], but you could see they were tired, they were nervous, and come on, they just kept going and keep fighting.

“They had more desire than us. That is not acceptable, and it’s very sad to lose today.”

De Gea is the only player in Manchester United’s history to have won the club’s Sir Matt Busby Player of the Year award four times, including three in a row between 2013-14 and 2015-16.

United are now cut adrift from the race for the top four, and would likely have to win each of their remaining seven games to even have a chance of qualifying for next year’s Champions League.

"They were tired, they were a bit nervous, you could feel it, and even with that we lose the game."

"It's a disgrace from us to be honest."

12 of the best gifts for Manchester United fans in 2022

Every VAR decision that has gone against Man Utd this season