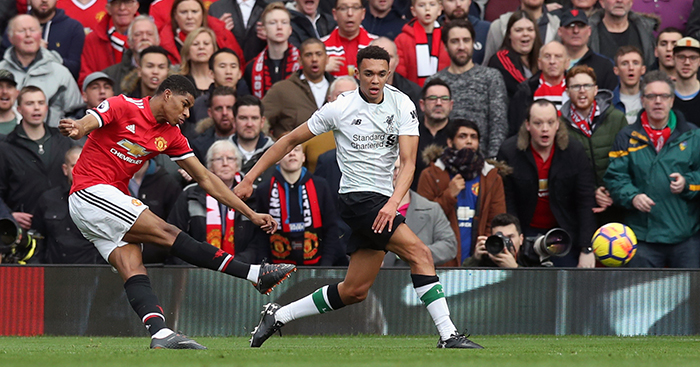 A Manchester United supporter has created a brilliant video showing the similarity between Marcus Rashford’s goal against Liverpool and one Cristiano Ronaldo scored against Dynamo Kiev in 2007.

Rashford was United’s hero at Old Trafford on Saturday, scoring twice in the first half to set his side on their way to a 2-1 win which moved them five points clear of Liverpool and consolodated second spot in the Premier League.

Rashford certainly justified Jose Mourinho’s decision to hand him his first start in the league since December 26, and his first goal in particular was special.

Latching on to Romelu Lukaku’s flick-on, Rashford headed the ball forward into his stride before cutting inside Trent Alexander-Arnold with a brilliant chop and then powerfully bending his effort past Loris Karius and inside the far post.

And if any United fan was thinking the goal seemed familiar. Posted by Faryz on Reddit, this side-by-side video shows Rashford was emulating a certain Cristiano Ronaldo in a United shirt.