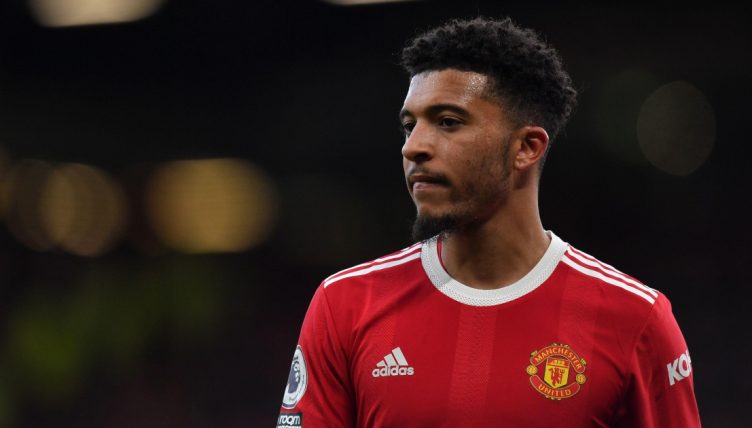 Manchester United believed that they should have been awarded a penalty after a handball from Cedric Soares during Saturday’s match against Arsenal.

United arrived in north London knowing that defeat against Mikel Arteta’s Gunners would end their hopes of Champions League qualification.

And Ralf Rangnick’s side found themselves two goals down after Nuno Tavares and Bukayo Saka found the back of the net.

But, minutes after Arsenal went 2-0 up, Cristiano Ronaldo stole in to half the deficit – and United believed they should have been given the opportunity to level the game immediately afterwards.

Jadon Sancho forced matters with some determined pressing and Soares appeared to handle the ball after tumbling over in the penalty area.

Both Sancho and Ronaldo protested loudly but the penalty was not awarded and United went into the break trailing 2-1.

Earlier in the week, Sky Sports pundit Jamie Carragher identified Sancho and Harry Maguire – who was dropped for the Arsenal game – as players who’ve been stripped of their confidence at Old Trafford.

“When Harry Maguire, Luke Shaw, Aaron Wan-Bissaka and Jadon Sancho joined United, there was a sense the club was going in the right direction with young English talent,” wrote Carragher in his column for The Telegraph.

“Now they look terrified to play at Old Trafford”.

He went on to say: “If I was Declan Rice or Jude Bellingham observing their England team-mates’ troubles, unless my motivation was a big payday, I would run a mile if United called.”

It remains to be seen whether United’s misfiring stars will be able to put things right under the guidance of incoming manager Erik ten Hag, but Sancho will surely be a big part of his plans to revitalise the side.