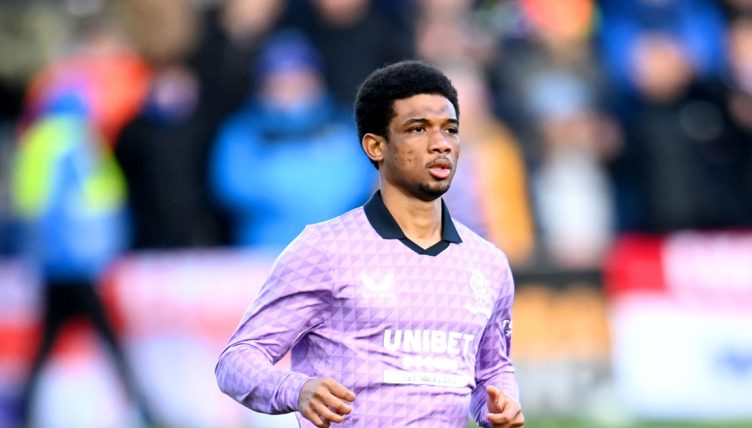 Amad Diallo took just five minutes to bag his first Rangers goal on his debut against Ross County, a matter of a couple of days after he joined the Scottish champions on loan from Manchester United.

The Ivorian winger struck early on, starting his first match since arriving at Ibrox on loan from Old Trafford earlier in January.

Wearing the No.9, Diallo struck at the far post in the fifth minute.

The ball was played in behind and Joel Aribo ran onto it, drilling it with his left foot across the face of the goal.

He found Diallo, who had snuck in behind the Ross County left-back and was free to tap home into the net.

The winger slid onto his knees in celebration, the Rangers players surrounding the debutant, who had only been at the club for two days before scoring.

Diallo joined Manchester United in January 2021 last year for a reported €25million. At just 19, he is regarded by the club as one of the most promising young players in Europe.

His move to Rangers was motivated by a desire for more playing time, with the youngster getting limited senior minutes at Old Trafford since his move.

“I chose this club because I think it is the ideal club for my progression,” Diallo said on his move to Rangers.

“I reflected on it a lot as I had lots of offers, but I chose Rangers as I think it is similar to the Premier League. I think for my progression it is the ideal destination.”

Diallo was meant to go on loan to Feyenoord last summer, but an injury meant the move could not go ahead.

It looks like he’s set to make the most of this loan though.

The young Man Utd star has scored inside five minutes on his Rangers debut 🤯 pic.twitter.com/hTqBFEevxf